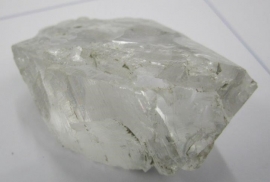 Only weeks after recovering a 425-carat diamond, Petra Diamond's famed Cullinan mine has produced another big stone, this time a 209.9 carat D-Colour Type II diamond. The big diamond is the third +100ct Type II D color gem-quality diamond Petra has recovered since March 2019 and the fourth in this financial year. The find will take some of the sting out of the 7% production decline in the third fiscal quarter due to a slowdown at its Finsch mine in South Africa.

“I have visited all of Petra’s operations and am impressed by the very capable teams and quality asset base, strongly reinforcing my initial views of the business," said new CEO Richard Duffy. "Our capital investment phase is largely over and we are well positioned to benefit from this as we move towards steady state operational performance. I am pleased with the incremental improvement in operational performance at Cullinan, Koffiefontein and Williamson and despite a challenging January, Finsch’s performance through February and March is as expected. Our focus remains on the delivery of free cash flow to reduce our net debt and generate future options for the Company.”