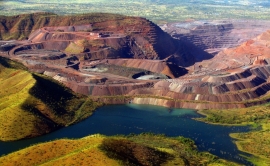 Rio Tinto's diamond production in Q1 2019 declined by a total of 18% on an annual basis from its two mining operations in Australia and Canada due to lower recovered grade. The lower grade particularly affected diamond output at its 100% owned Argyle mine in Australia, where production fell by 22% year-over-year and 13% from the final quarter of 2018 to just under 2.8 million carats. Likewise, Rio Tinto's attributable output at its 60% owned Diavik mine in Canada (Dominion Diamond Mines own a 40% share) fell by 5% year-over-year and 6% from Q4 2018 to just north of 1 million carats, as lower recovered grades were partially offset by higher ore processing.