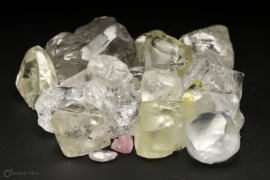 Lucapa Diamond Co. has reported an "excpetional performance" from the Mothae kimberlite mine in Lesotho in its first full quarter of production, while output from the Lulo alluvial mine in Angola fell as the miner focused predominantly on lower grade mining areas. The miner held two milestone tenders during Q1 2019: its first ever sale of Lulo diamonds via international tender under the new diamond marketing reforms enacted by the Angolan President, Joao Lourenco, and its first commercial run of mine tender from Mothae via Bonas tender house in Antwerp.

Lucapa reported the recovery of 6,918 carats in Q1 from the Mothae mine, which is 54% ahead of its planned peformance, with an average diamond grade of 2.44 carats per 100 tonnes, which is 29% ahead of schedule. The miner recovered a total of 138 +4.8 carat diamonds, including 42 'Specials' (+10.8 carats) that featured three +50 carat diamonds (the largest was 83 carats), and have now recovered five +50 carat stones  from the new Mothae commercial plant and the earlier bulk sampling program. The new plant treated 283,042 tonnes of ore, or 20% ahead of plan. The first tender of commercial diamonds produced through the new 1.1 Mtpa plant was completed in Antwerp during the Quarter. The parcel of 5,411 carats sold for a total of US$3.8 million (A$5.3 million). This represented an overall average price per carat of US$707 (A$987) for the total parcel, which included additional smaller recovered. The ~4,100 carats in the +11 sieve size fraction and above achieved an average price per carat of ~US$900 (~A$1,260) The highest price achieved for an individual diamond was >US$36,000 per carat.

At the Lulo project in Angola, Q1 diamond production totaled 3,369 carats, which was 25% below the previous corresponding quarter, during which a high proportion of plant throughput was sourced from higher- grade mining blocks. Mining during the current quarter focused predominantly on lower grade mining areas. The miner recovered a total of 92 +4.8 carat diamonds during the quarter, including 31 Specials. The largest Special was a top-color 128 carat stone – the 12th +100 carat diamond recovered to date at Lulo. Colored recoveries of note during Q1ncluded a 7.5 carat fancy purple pink gem. The only Lulo sale during the quarter was the first international tender in Angola, which featured seven large and top-quality Lulo diamonds totalling 498 carats, achieving bids of US$16.7 million (A$22.9 million), representing an average price of US$33,530 per carat. Payment for one of the Lulo diamonds included in the historic tender was not received within the terms of the tender, and is not included in Q1 revenue. The miner held off on sales outside th one tender, building up a a diamond inventory of 4,871 carats that they will sell in Q2 2019.