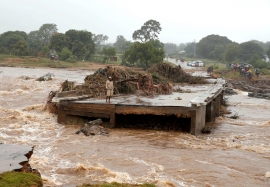 As the Zimbabwe Consolidated Diamond Company (ZCDC) sifts through the wreckage of the devastating Cyclone Idai - which has already claimed the lives of nearly 1,000 people in Mozambique, Zimbabwe and Malawi, displacing hundreds of thousands, destroying crops and leading to a cholera outbreak - preliminary indications are that the firm will miss its first quarter production target due to the cyclone and other challenges, including fuel shortages and effects of the January 14-16 violent demonstrations. ZCDC has targeted producing 4.1 million carats this year, up from 2.8 million carats hauled last year, but with its current operational projects in Chiadzwa and Chimanimani affected by Cyclone Idai, output could be negatively affected.

Of all areas in Zimbabwe hit by Cyclone Idai, which struck in mid-March and left a trail of destruction in its wake, Chimanimani was the worst affected, creating a humanitarian crisis. The Chimanimani district has been cut off from the rest of the country by torrential rains and winds that swept away roads and bridges knocking out power and communication lines. The cyclone also delayed the commissioning of a mine in Chimanimani, while mining operations at Chiadzwa have also been closed as the mining areas have become waterlogged and inaccessible. “ZCDC’s mining operations have also been affected by the cyclone, especially in Chimanimani,” said ZCDC CEO Dr Moris Mpofu. “The mine at Chimanimani was due for transition from project phase to production in March 2019 and now is being delayed due to flooding of pits [and] damaged infrastructure. We are doing an extensive assessment to establish how long it is going to take us [to start mining]. Initial indications are that it may be more than three months for us to get back to Chimanimani to start mining. Nonetheless, we will continue to ensure that we invest in bringing the infrastructure back to its original state.”

Mpofu said the ZCDC was regrouping to recover from the aftermath of Cyclone Idai and put its production back on course. "Most of the open pits which were being mined in Chiadzwa were flooded during the heavy rains. ZCDC is now in the process of de-watering and re-mapping the pits before mining can commence on affected pits. In Chimanimani, ZCDC is in the process of rehabilitating the road network, which was destroyed for the local community, and to regain access into its mining concession." He expressed his confidence, however, that the company would meet its target. "ZCDC is confident that the 4.1 million carats target will be achieved by year-end.”