Stornoway Bounces Back in Q1 2019 Despite Challenging Market 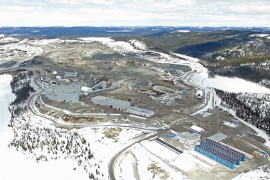 Canadian miner Stornoway Diamond Co. rebounded from a difficult final quarter of 2018 to post significant increases in total carats sold, leading to a big rise in gross proceeds. Stornoway in Q1 2019 sold 429,506 total carats at two tender sales a Bonas tender house in Antwerp, earning about US$35 million (C$47 million) at an average price of US$83 per carat (C$110 per carat).

The results represent a 38% increase in carats sold over the last quarter (up from 312,242 carats), and a 47% rise in revenue, with the average price per carat rising 8%. Still, the results lag behind Q1 2018, mainly due to the 19% decline in prices from $103 per carat to $83 per carat in a challenging market for diamond miners. "While the pricing of higher quality goods and specials continues to remain strong, smaller and lower quality goods have remained stable at the lower prices experienced in the fourth quarter of 2018," the company notes.

“Sales in the first quarter were significantly higher than the previous quarter on the good production results of the last three months of 2018, which was the first full quarter with fully ramped-up underground operations," said Patrick Godin, President and CEO of Stornoway. The average pricing obtained increased as well, primarily due to improvements in the quality of the goods and the mix sold. The rough diamond market, however, did not show notable improvement from the fourth quarter."

Stornoway's Q1 output was 444,562 carats recovered from the processing of 582,613 tonnes of ore at an average grade of 76 cpht. Carat recoveries decreased by 8% compared to the fourth quarter of 2018, principally due to mechanical issues at the front end of the process plant related to very cold weather in January and February. In March, the process plant surpassed its budgeted daily rate with an average of 7,209 tonnes processed per day. Notably, the miner says it will suspend open pit mining operations starting in April, as the current stockpile of Renard 65 open pit ore is sufficient to meet planned process plant feed requirements into the second quarter of 2020. The suspension will enable the idling of part of the surface mobile equipment fleet, thus realizing operating cost savings and pushing forward capital maintenance costs. Godin says he expects no effect on revenue in 2019.