Alrosa and Endiama To Step Up Cooperation in Angola 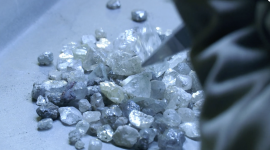 Russian diamond mining giant Alrosa and Angola's state-owned diamond firm Endiama have signed an agreement to develop joint projects including diamond production, exploration, training, research and technology exchange. It identifies areas of mutual interest to develop diamond production in Angola as well as cooperation on mechanisms in diamond sales. The companies also intend to work together on the development of industry self-regulation mechanisms and responsible diamond supply chains in support of the Kimberley Process.

Among the main goals is the financing of existing and future joint projects of concessions, promoting integrated delineation of international markets for rough and polished diamonds (both natural and synthetic) to protect fair competition and interests of diamond mining countries. Alrosa CEO Sergey Ivanov and Chairman of the Administrative Council of Endiama Jose Ganga Junior signed the document in the presence of President of the Russian Federation Vladimir Putin and President of the Republic of Angola João Lourenço.

"For both Russia and Angola, the diamond industry is an important part of national life," said Sergey Ivanov, Alrosa CEO. He said the agreement is about more than spending money to expand their international markets, it is also about "jobs for people and dozens of social projects implemented for them. [We] are pleased to seal our long-term cooperation with an official document proclaiming the joint desire to develop our common initiatives." The companies are co-founders of Catoca, Angola's largest diamond mining company. Catoca annually produces and sells about 6.8 million carats of diamonds. Its reserves are estimated at 120 million carats. In addition, ALROSA and Endiama have been conducting exploration in Angola as part of a joint venture since 2014.

During the official visit, Vladimir Putin and Joao Lourenço signed six bilateral documents: in addition to cooperation in diamond mining, exploration and processing, they signed agreements on gas and oil production, space and agriculture. Prior to the meeting, Lourenco said Angola is one of the principal buyers of Russian arms and his country wants to “not only buy but also produce them.”