Stornoway's Losses Continue To Mount in 2018 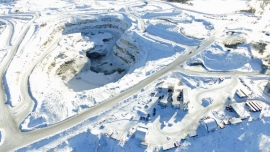 Canadian diamond miner Stornoway encountered a host of difficulties in 2018 on its way to a US$246.8 million (CA$329.4 million) loss, substantially widening the loss of US$85.6 million (CA$114.2 million) recorded last year. The miner's challenges included delays in the ramp-up of the Renard 2 underground mine, the processing of low-grade stockpiles during the transition from open pit to underground operations and weak diamond prices. As a result of the delays and processing plant issues in November and December, the miner missed the low end of is guidance with a diamond recovery of 1.32 million carats, compared to a revised guidance of 1.35 to 1.40 million carats recovered. Investors were not impressed, as miner has lost approximately 40% of its value since the publication of the 2018 Financial Results.

Further contributing to the loss was an impairment charge, or a devaluation of the company’s assets, of US$62.3 million (CA$83.2 million), as well as a deferred income-tax payment of $58 million (CA$77.4 million), leading to several the financing agreements with stakeholders announced in the fourth quarter. Stakeholders have arranged for the miner to have greater liquidity, and thus greater financial and operational flexibility, through the deferral of certain loan principal repayments for a 24 month period, representing debt service cost deferral of more than $53.7 million; amendments to the Renard diamond streaming agreement comprising a supplementary up front deposit of the US dollar equivalent of $45 million in cash and certain sales and pricing changes; and a private placement of units consisting of common shares and warrants for approximately $30 million, subscribed by existing shareholders.

Looking for positive signs, Stornoway did report that its carat recoveries improved by 47% in both the third and fourth quarters and expects output to rise to between 1.8 million and 2.1 million carats in 2019 as it moves to a higher-grade area of the mine. Additionally, President and CEO commented, "As the lowest cost diamond mine in Canada, Stornoway possesses unique leverage to take full advantage of an upswing in rough diamond prices." He added, "In 2019, we will be focused on efficiency, striving to maximize value generation in every aspect of our business. We will continue exploration and resource development on the Renard property, aiming to extend mine life and grasp strategic opportunities.”