Botswana Diamonds To Start Production at Thorny River Project in 2019 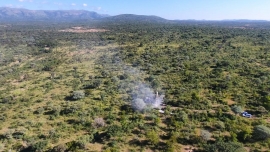 Just about a year ago, the executive chairman of Botswana Diamonds John Teeling told us, "Instead of being an explorer, I would like to be a producer. We would like to get to production." According to yesterday's announcment from Botswana Diamonds, it looks as if he is going to get his wish: the junior miner said is on track to commence bulk sampling and become a diamond producer by mid-2019. The junior ran up an operating loss of about $250,000 (£190,000) in the six months ended December 31, 2018, with net assets totalling about $10.6 million (£8.03 million).

The Thorny River project in South Africa is reportedly on target to commence bulk sampling and produce diamonds. The company confirmed that agreements have been finalised with a mining contractor and a diamond processor, and delineation drilling is completed. Assuming final permits are obtained, bulk sampling will commence in May. They said that a drilling program to delineate the dyke in order to optimise bulk sampling is completed, and after commencing in mid 2019, they expect to ramp up to 20,000 tons a month.

In other news, Botswana Diamonds says a report on the Maibwe prospect in the Kalahari Desert in Botswana, where diamondiferous kimberlites have been found, has been completed and sent to BCL, the 51% owner of the licences. The company expects that BCL will offer their stake for sale. Mr. Teeling told us previously that Maibwe has big potential for huge upside if early sampling is consistent with the resource. They also note that following the re-discovery of eight kimberlite pipes in the Free State of South Africa close to the iconic Koffiefontein and Jagersfontein diamond mines, the company completed whole rock geochemistry, mineral chemistry and detailed ground geophysics work; a phased drilling program has been proposed and is in a planning phase.