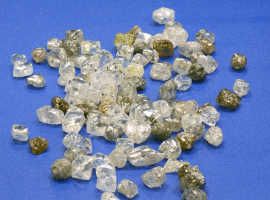 Following test drilling carried out earlier this month at the Verkhne-Munskoye diamond deposit located in the west of Yakutia, Russian diamond miner Alrosa has announced that it has the potential to "become one of the richest in large diamonds among Alrosa’s deposits."

The miner conducted its experiment from March 11-15 with the intention of clarifying the diamond-bearing capacity of the northwestern area of the Zapolyarnaya pipe, which is a part of the Verkhne-Munskoye deposit. The main goal was to learn about the color characteristics of the diamonds, the grades and the cost of one carat in this particular part of the pipe. Their results were better than expected. Alrosa processed 100,000 tons of ore and the diamond grades appeared to be higher than planned - particularly concerning large diamonds. The experiments gathered 239 stones weighing more than eight carats and included two gem-quality stones weighing 51.15 and 70.67 carats each.

“The experiment showed once again that the Verkhne-Munskoye deposit is rich in large crystals. In 5 days, we extracted 239 large (over 8 carats) diamonds from the Zapolyarnaya pipe, or more than 3.5% of the number of diamonds extracted during the experiment. This is a very significant indicator,” Andrey Cherepnov, ALROSA Chief Engineer, said.

The official launch of the Verkhne-Munskoye diamond deposit was held on October 31, 2018, in the format of a call-in show with the participation of President of the Russian Federation Vladimir Putin. The Verkhne-Munskoye deposit is currently Alrosa's largest investment and is expected to deliver about 1.8 million carats of rough diamonds annually, with reserves sufficient to continue mining for more than 20 years - until 2042.