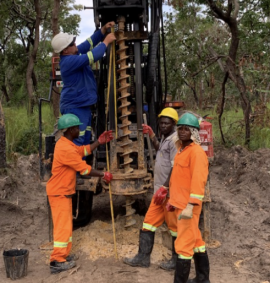 Lucapa Diamond Co. reports that its inferred diamond resource estimate of in-situ carats at its 40%-owned Lulo diamond mine in Angola has nearly doubled since it was last analyzed in May 2017, increasing 90% to 80,400 carats. The modelled average price per carat also rose to $1,420, a 17% increase over the previous modelled estimate of $1,215 per carat. Overall sales of Lulo diamonds to date total ~US$141 million at an average price per carat of ~US$2,100.

The inferred resource estimate conducted by external consultants Z Star Mineral Resource Consultants increased substantially despite 19 months of mining depletion at Lulo to 31 December 2018, during which time >30,000 carats of diamonds were recovered and sold for ~US$62 million. The miner points out that this total equates to more than four times Lulo’s production of 19,196 carats in 2018, which was the fourth year of commercial production at the alluvial mine. The newly estimated grade also increased 150% to 0.15 Stns/m3 (stones per cubic metre) from 0.06 Stns/m3, or to 17.70 Cphm3 (carats per 100 cubic metres) from 6.99 Cphm3.

Lucapa managing director Stephen Wetherall says the definition of additional resources and improving knowledge on existing resource areas is a result of an extensive and ongoing resource-definition drilling and sampling program, which included an additional 4,200 auger holes (36,000 metres drilled). This exploration activity is taking place in parallel with the miner's alluvial production, which it plans to increase over the course of 2019. “Together with the significant positive diamond marketing reforms introduced in Angola enabling producers like Lulo to achieve international market prices for their diamonds, the near doubling of in-situ resource carats in the upgraded Lulo Diamond Resource supports the Lulo partners’ plans to increase alluvial production in 2019,” Wetherall said. He added that the resource-definition drilling program will continue at Lulo throughout 2019, with exploration targets of 250,000 - 300,000 bank cubic metres of alluvial gravels having already been identified.