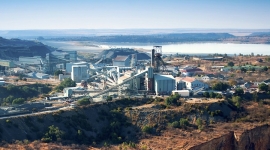 Despite a 22.12% vote recorded against his re-election at Petra Diamonds' 2018 Annual General Meeting, the miner will keep company founder Adonis Pouroulis on as its chairman, while adding in a statement that "we have considered the concerns raised by our shareholders." While the company has been attempting to right the ship in the midst of sharply declining shares and a huge debt increase incurred in the process of expanding its iconic Cullinan mine in South Africa, they stated that the appointment of a new chair was "not appropriate" at this time.

Pouroulis founded Petra in 1997 and has been its chairman ever since. While a fifth of the Board and Nomination Committee voted to move on from the founder as chairman, the company "affirmed its assessment that the Chairman continues to demonstrate the independence of thought and challenge required for his role, notwithstanding the number of years he has served as a Director." They added, however, that the committee expects to make further changes to the composition of the board during this calendar year. Petra's board noted the announcement of the appointment of Richard Duffy as the new CEO with effect from 1 April 2019, following a process announced in September 2018, and the appointment of two new Independent Non-Executive Directors, Mr Bernard Pryor and Mrs Varda Shine, effective from 1 January 2019.