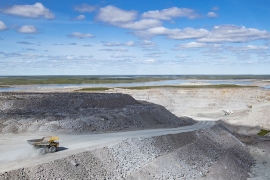 The Gahcho Kué Diamond Mine, a joint venture between Mountain Province (49%) and De Beers Canada (51%), exceeded expectations in its first full year of commercial production, setting records for carat recoveries and sales despite a challenging end of year 2018. Mountain Province reports that the Gahcho Kué Mine exceeded its upper end of FY2018 guidance of tonnes treated, processing 3,194,000 tonnes (2017: 2,775,000 tonnes) and recovered 17% more carats than last year, settting a new high for the mine of 6,937,000 carats (2017: 5,934,000 carats) with a 4% increase in the average grade.

The adjusted EBITDA for 2018 increased 33% to C$139.2 million from C$103.4 million in 2017, which the miner says is indicative of the good cash generation of the Gahcho Kué Mine. For the full year 2018, the company recorded a net loss of C$18.9 million or $0.10 loss per share (2017 net income $17.2 million or $0.11 earnings per share). In determining the net loss, MP included unrealized foreign exchange losses of $32 million on the translation of the Company's USD-denominated long-term debt. The unrealized foreign exchange losses are a result of the weakening of the Canadian dollar versus US dollar. The company notes, however, that the weakening Canadian dollar compared to US dollar is beneficial to the company as sales are made in US dollars and operating costs are incurred in Canadian dollars.

"Financial Year 2018 was Mountain Province's first full year of commercial production at the new Gahcho Kué Mine and we are pleased with its operational performance," said Mountain Province President and CEO Stuart Brown. "The Gahcho Kué Mine has settled down well and has outperformed our initial expectations in terms of throughput and overall diamond production which is an excellent achievement. This trend has continued into 2019 with the mine continuing to perform substantially ahead of expectations." Brown added that the miner is also focusing on its 100% owned Kennady projkect, with advanced-stage diamondiferous kimberlites and near mine exploration opportunities. On the state of the 2018-19 diamond market, he said, "The rough diamond market experienced a relatively difficult finish to the year with price pressure in the smaller and lower quality diamond categories, although we did see a stabilisation of prices towards the end of the year and so far, we have seen a small improvement in the lower quality categories at the start of 2019." He sees the longer-term view of the fundamentals of the diamond business as positive and believes MP will be well-positioned to benefit in the event diamond prices improve. MP sayus that prices for lower quality goods stabilised in the last quarter of 2018, with small single digit increases realised in 2019 sales.