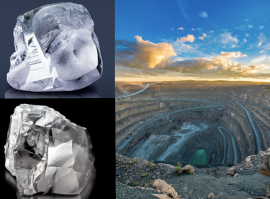 Gem Diamonds, which operates the Letšeng mine in Lesotho, recovered four high-quality diamonds larger than 100 carats in January 2018 and never looked back, riding a record number of +100-carat diamond recoveries in a single calendar year (15) to increased revenues and profit, but they have declined to pay out a dividend. The first big find of the year was the exceptional 910-carat Lesotho Legend, which the miner sold last March for $40 million. Over the course of the year they added a 138.28-carat white diamond which achieved US$60,428 per carat - the highest dollar per carat for a white rough diamond during the year - and a a 4.06 carat, pink diamond that earned US$64,067 per carat - the highest price per carat achieved during 2018. The miner sold 44 diamonds for more than $1 million in 2018, achieving a value of $137.2 million.

Gem Diamonds’ board decided not to propose the payment of a dividend owing to some concerns about the condition of the diamond market at the low-end of the price range, said Clifford Elphick, CEO of Gem Diamonds. “It was on the cusp in the board meeting,” said Elphick responding to an analyst’s question regarding the absence of a dividend considering the company posted a 370% leap in year-on-year headline earnings for its 2018 financial year. Elphick said the company would have to develop substantially improved cash on its balance sheet before paying a dividend. “The backdrop was the industry – the bottom-end uncertainty. This created an early warning signal in the background, and that was a concern,” he said.

“Gem Diamonds achieved a good set of results, characterised by the recovery of 15 diamonds greater than 100 carats, a record for a single calendar year," Elphick added. "Production in 2018 also included the highest recovery of diamonds greater than 20 carats, with 80% of revenue primarily generated by diamonds greater than 10 carats. The mine plan for Letšeng was revised during 2018, with the aim of further reducing the waste stripping through the steepening of inter-ramp slope angles. Mining in accordance with this plan has commenced and is expected to significantly increase the net present value of the mine. The Business Transformation process has progressed well and remains on-track to achieve the target of US$100 million in cost savings and efficiencies by 2021. By December 2019, the initiatives already implemented are expected to deliver US$64 million to the end of 2021.”