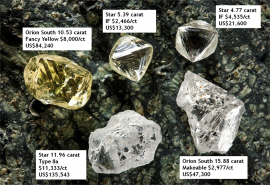 Canadian junior miner Star Diamond Corp. has reported "unusually high proportions of Type IIa diamonds" at its kimberlite diamond project in Saskatchewan, and investors did not fail to notice, sending its shares soaring almost 15% on the news, closing at 24 Canadian cents. A recent major study of the diamond parcels recovered at the corporation's 100%-owned Star - Orion South Diamond Project confirms that 27% of the diamonds recovered at the Star kimberlite and 13% of those recovered at the Orion South Kimberlite fall into the IIa category of high-value and large stones that typically represent less than 2% of all rough stones mined from kimberlites.

Star Diamond identified a 49.09-carat diamond from the Star pipe and a 32.35-carat one from Orion South. It also recovered two diamonds that were smaller, but more valuable: An 11.96-carat stone from Star worth $11,333 per carat, and a 15.88-carat diamond from Orion South valued at $2,800 per carat. “The presence of two high-value diamond groups (octahedra and type IIa) greatly strengthens the future potential-production diamond pricing from the Star and Orion South kimberlites,” the company’s senior vice president of exploration and development, George Read, said.

Star Diamond notes that only a small number of active diamond mines regularly produce Type IIa diamonds with the most important of these mines being Gem Diamonds' Letseng Mine in the Kingdom of Lesotho and Lucara's Karowe Mine in Botswana. While both are lower-grade kimberlite deposits, the fact that they are prolific sources of large high-value Type IIa diamonds makes them highly economic deposits, occasionally delivering some of the largest gem-quality diamonds ever recovered.

During 2018, Star Diamond Corp. announced the positive results of the independent Preliminary Economic Assessment (“PEA”) on the Star and Orion South Kimberlites. The PEA estimates that 66 million carats of diamonds could be recovered in a surface mine over a 38-year project life, with a Net Present Value (“NPV”) (7%) of $2.0 billion after tax, an Internal Rate of Return (“IRR”) of 19% and an after-tax payback period of 3.4 years after the commencement of diamond production.