Alrosa Unearths Another Large Stone (99 ct) From New Kimberlite Mine 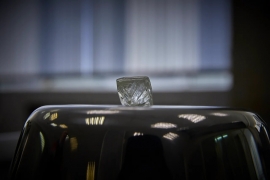 The gem has an octahedral shape and is of gem-quality with inclusions in the peripheral and intermediate zones. The rough diamond is transparent with a visible yellow shade. "This is the second major find since the launch of the deposit last October, said Evgeny Agureev, Member of the Management Board, Director of the United Selling Organization at ALROSA. "It allows us to speak about the great potential of the Verkhne-Munskoye deposit. Not every kimberlite pipe regularly brings large diamonds over 50 carats. Especially when it comes to such a large crystal, like this one - weighing almost 100 carats. Despite some inclusions, it is clear that this is a high quality stone. After a detailed study and evaluation, I believe it will be transferred to Diamonds ALROSA cutting and polishing division."