Petra Diamonds Anxious for Next Big Stone to Ease Debt 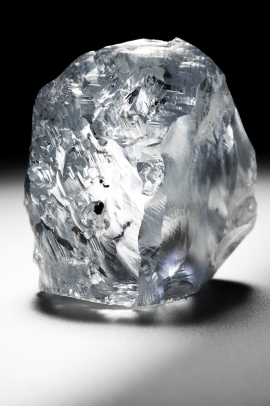 Petra Diamonds, owner of one of the world’s most famous diamond mines - the Cullinan mine in South Africa - could be about a decade away from clearing its multi-million-dollar debts, according to Reuters. As Emma Rumney and Barbara Lewis explain, Petra bought Cullinan in 2008, "aiming to breathe new life into the South African mine renowned for yielding the largest rough gem diamond ever found - 3,106 carats - and being the world’s main source of rare blue diamonds. The London-listed miner, which acquired Cullinan from industry leader De Beers, borrowed heavily to revamp the facility and began mining a new section of ore last July."

Petra told Reuters its debts from the mine stood at around 65 percent of its overall $650 million in borrowing, which would represent about $420 million. Cullinan’s general manager Juan Kemp added that it could take “between five and 10 years” from the opening of the new section to clear the debts related to the mine. That goes beyond the 2022 maturity of Petra’s bond notes. The company says it expects to generate free cash flow this year - a target it had hoped to reach in 2017 before being derailed by strikes and construction delays - and start reducing its debts.

Petra's flagship Cullinan mine has not fared well recently, earning near-historical low prices from its rough diamonds in H1 2019, well below expectations. Prices achieved from the miner's Cullinan goods slumped 31% compared to last year, earning just $96 per carat, and compared to a nine-year average of $140 per carat from 2009 to 2018, the miner said. This is a cause for great concern, as Kemp admitted to Reuters that one thought kept him awake at night: “When will we get that next big stone?” They have not had many recently. “Everyone is very much hoping, for the sake of the equity holders and debt holders, it will deliver more higher-quality stones,” he added.

The journalists note that a single large, valuable stone could bring in millions of dollars and lighten Petra’s debt load. So far, however, the only large stones recovered from the new mining section have been a dirty color, and low quality. Kemp said the new section, of the Cullinan mine, which analysis suggests should be rich, had yet to show what it can produce. “We expect a large stone at some point,” he said.