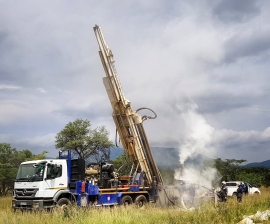 Joint-venture partners Botswana Diamonds and Vast Resources Vast Resources plc have in principle been granted the right to mine diamonds on the Heritage Concession of the Marange Diamond Fields. The companies signed a memorandum of understanding to jointly investigate diamond opportunities in Zimbabwe in May this year, and last August were apparently awarded access to the Marange concession.

However, doubt had been cast over the project after the government of Zimbabwe selected Russian diamond miner Alrosa and China’s Anjin Investments to partner with the state-run Zimbabwe Consolidated Diamond Company (ZCDC). The Zimbabwe National Diamond Policy says the ZCDC, Murowa Diamonds and two other private companies would be permitted to undertake diamond exploration and mining. After the Russian and Chinese miners were announced as those foreign companies, it appeared the Vast-BOD joint venture had been left out in the cold. That no longer seems to be the case.

In 2008, Vast acquired a database relating to diamonds in Zimbabwe, and until 2010 conducted exploration in the field using information from the database. BOD has independently acquired a Zimbabwe diamond database. At the time of signing the MOU, BOD Chairman JohnTeeling said, "Zimbabwe is a country with excellent diamond potential. Both Botswana Diamonds and Vast Resources have extensive experience in and knowledge of the country. It is opening for business and both BOD and Vast are keen to make the most of this opportunity."