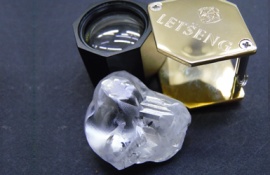 These increases across the board were achieved despite a bit of a slowdown in the fourth quarter concerning tons of ore processed, recoveries and average prices, which fell by 32% to $1,259 per carat compared to Q3. During the period, the highest diamond price achieved was $64,067 per carat for a 4.06 carat, pink diamond, which is also the highest price per carat achieved during 2018. The miner says the reduction in average value per carat compared to Q3 2018 is a result of lower quality recoveries in Q4, and while they treated slightly fwer tons than in the previous period due to planned maintenance and repairs undertaken in the plants, tons treated for H2 2018 (3.5 million) was significantly up from H1 (3.0 million tons). The miner also noted it was back on track in so far in 2019, as improved quality in production led to strong pricing achieved at the first tender of 2019, with an average price of $2,004 per carat.

In Q4, Gem sold nine diamonds for more than $1.0 million each, generating revenue of $14.6 million, bringing their total to 44 diamonds sold for more than $1.0 million each during 2018, generating revenue of $137.2 million. The miner said it remains on track to achieve its target of $100 million in incremental revenue, productivity improvements and cost savings for the four-year period to end 2021. Initiatives that have been implemented to date are expected to deliver $60 million of the targeted $100 million.