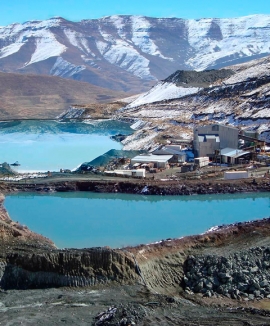 Firestone Diamonds, a diamond producer with operations focused in Lesotho (Liqhobong Diamond Mine), reported "reasonsable" results in the quarter ended 31 December 2018 (Q2), increasing sales despite the "deterioration" in demand and prices for smaller, lower value stones. The miner sold 191,735 carats during the quarter, a slight decline from the 194,206 carats sold last quarter, realising revenue of $13.9 million (Q1: $13.5 million) at an average value of $72 per carat (Q1: $70 per carat). However, the quantiy of carats sold increased significantly over the same period last year (156,942 carats), pushing earnings 11% higher over the $12.5 million earned during the same period last year despite a drop in the average value per carat ($80 in Q2 2017).

Production during the quarter continued to deliver robust output compared to the same period last year, as higher grades pushed production to 224,947 carats recovered from 884,252 tons of ore treated compared with 180,709 carats recoverd from 963,213 tons of ore treated. The amount of tons treated was lower than last quarter due to unscheduled repair work being undertaken on one of the scrubbers during November, but the late arrival of the summer rains enabled the miner to continue focusing on the southern, higher grade part of the pit, resulting in a higher grade achieved of 25.4 cpht, compared to 18.8 cpht last year and 23.8 cpht last quarter. Firestone treated 1.9m tons of ore during the first six months of FY2019, in line with annual guidance of between 3.6 million and 3.9 million tons treated. Their year-to-date recovery of 465,680 carats keeps the miner on track with guidance of between 820,000 and 870,000 carats recovered for FY2019.

"We had a reasonable second quarter, barring a scrubber failure sustained in November, ending the financial half year with all our production parameters on track to meet guidance by year end," said CEO Paul Bosma. "The demand for the smaller, lower value stones deteriorated further during the quarter, albeit that it stabilised at the December sale and remained at the same level for the January sale. Pleasingly the demand for larger, better quality stones remains strong as was evidenced by the pricing received for the 46 carat white stone that was sold during the first sale of 2019." The trend observed from the recently concluded sale on 1 February was that prices remained stable. Firestone earned $9.1 million from the sale of 125,871 carats for the January sale, which included diamond inventory of 113,527 carats that were on hand at the end of December 2018.

Looking at the retail market, the adds that "reported retail sale results of diamond jewelry during December have been mixed with indications that the US market was holding steady but demand from China was weaker. The peak retail season for diamond jewelry will be concluded during February when the Chinese New Year celebrations and Valentine's Day take place. Thereafter one would be able to more accurately gauge polished demand and the effect on rough pricing. It is key that mid-stream inventory levels have to reduce to improve liquidity in this part of the value chain."