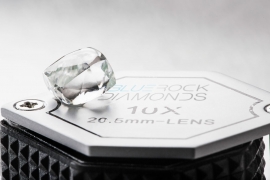 BlueRock Diamonds plc, the AIM-listed junior mining company which owns and operates the Kareevlei Diamond Mine in the Kimberley region of South Africa, has recommenced operations after South Africa's mining regulator ordered a temporary suspension on January 24 following an accident. The Department of Mineral Resources (DMR) imposed a section 54 notice - which concerns the code of practice relating to the operation of trackless mining machines - following an event involving an external contractor.

BlueRock reports that the individual involved in the accident is expected to make a full recovery and, as previously stated, the temporary suspension is not expected to impact upon the company’s production volume guidance for the year. The company has not yet released its guidance for 2019 but reported that FY2018 production increased 24% year-on-year to 189,990 tonnes (FY2017: 153,147 tonnes), falling slightly below the revised production guidance for the year of 200,000 tonnes. Their average grade in 2018 increased 34% to 3.28 carats per hundred tonnes following an impressive Q4 which saw their average grade reach to 4.0 cpht, an increase of 63% over the average for 2017.

BlueRock sold 5,805 carats in 2018 (+71%) at an average price of $332 per carat ($362/ct in 2017). Adam Waugh, CEO commented, “2018 has seen good progress for BlueRock with both production and the recovered grade increasing significantly. The results from our second kimberlite pipe, KV1, which came on stream in June last year, and from the undiluted levels of our first kimberlite pipe, KV2, have shown a marked increase in grade, which we expect to continue into 2019. Our move to 365-day operations is expected to start in February and is expected to give us around 40% additional plant availability. This, coupled with a consistently improving grade profile, makes the outlook for 2019 very encouraging."