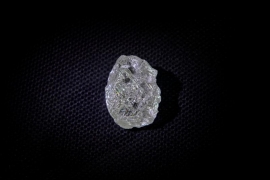 Alrosa has recovered a unique rough diamond weighing almost 200 carats, which was mined at the Udachnaya kimberlite pipe in mid-January 2019. It is one of the largest diamonds recoverd by the Russian miner in recent years. While the miner has unearthed several stones larger than 100 carats recent years, as well as some uncommonly large fancy colored diamonds, the last time they unearthed a larger diamond was in the spring of 2016, when they announced the recovery of a 207-carat rough diamond from the Zarnitsa pipe at Udachny Mining and Processing Division in the Russian Republic of Yakutia. The newest large diamond is transparent, with a slight yellowish tinge.

"Such large gem-quality discoveries, weighing more than 100 carats, confirm that there are many unique precious minerals in the reserves of the Udachnaya kimberlite pipe," said Evgeny Agureev, Member of the Management Board, Director of the United Sales Organization at ALROSA. "Since the beginning of the development in 1967, the pipe has given hundreds of large diamonds to our company. In the near future, this rare specimen will go to the United Selling Organization for the detailed study and evaluation."