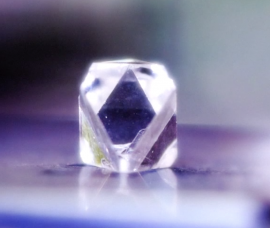 Russian diamond mining giant Alrosa has announced its production results for 2018 and Q4 2018, reporting that annual production declined by 7% to 36.7 million carats, while an 8% decline in carats sold was offset by a higher average price per carat, leading revenues to rise 6% to $4.5 billion. The miner attributed the fall in output to the shutdown of the Mir underground mine and the completion of open-pit mining at the Udachnaya pipe. Alrosa sold 38.1 million carats in 2018 (41.2m in 2017), but the average price per carat increased by 21% to $164, as the company noted an overall recovery in diamond demand except for the lower priced stones, where demand was weak. Alrosa has set its 2019 guidance at 38 million carats.

Alrosa's Q4 diamond production increased by 2% year-over-year (down 2% compared to Q3) to 10.3 m carats driven by seasonal suspension of production at alluvial deposits, which was almost fully offset by increased output at underground mines. The company sold 9 million carats of rough goods in Q4 (up 34% q-o-q), including 5.3 m carats of gem-quality diamonds (up 12% q-o-q) and 3.7 m carats of industrial diamonds (up 87% q-o-q). In value terms, Q4 sales declined by 7% year-over-year (down 13% q-o-q) to $845 million, with rough diamond sales (excl. polished diamonds) amounting to $824 m. Alrosa realized an average price per carat for gem-quality diamonds of $153, representing a 10% increase compared to Q4 2017, but was down 23% compared to Q3 due a lower share of large diamond sales.

Alrosa provide a market overview to accompany its operating results. Concerning the rough market, they note, "The trend of weaker demand for lower priced stones that emerged in Q3 continued into Q4 2018. Demand for rough diamonds echoed the situation on the polished diamond market, where uncertified melee diamonds saw the strongest price decline due to oversupply, weak rupee and lower liquidity in India. Lower prices for small-size diamonds coupled with flat personnel expenses decreased the profitability of melee diamond polishing." As for the global diamond jewelry market, they note that in the first nine months of 2018 it grew by 5% y-o-y. North America, the world’s largest diamond jewelry consumer, showed stable sales growth through the year, up 5% over 9M 2018. They add that, "In most of the South Eastern Asia, including India, the diamond jewelry sales growth slowed down, with some countries showing a decline triggered by devaluation of local currencies against US dollar. High demand in China in early 2018 drove a 7% sales growth in the region in 9M 2018. The preliminary data on the diamond jewellery sales in China in Q4 2018 shows further decline."