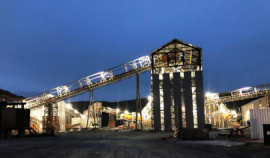 Lucapa Diamond Company has commenced commercial diamond recoveries at its new 1.1Mtpa (million tons per annum) Mothae mine, a "high-quality kimberlite resource" located in Lesotho. Lucapa has been developing a new mine at Mothae throughout 2018 to complement production from the high-value Lulo mine in Angola. During Q4 2018, Lucapa completed construction of Mothae's new treatment plant, which incorporates two XRT diamond recovery circuits, and commenced the commissioning phase. The miner also highlights the approval of new diamond marketing regulations in Angola, enabling Lucapa and its partners to commence marketing large and exceptional diamonds from the Lulo alluvial mine via an international competitive bid process. The bidding will close on 31 January 2019. Further, Lucapa as a strategic goal to pursue its partnerships with leading global manufacturers and diamantaires for the cutting and polishing of select high-value diamonds.

During the Quarter, ~4,000 carats of Mothae diamonds recovered from the bulk sampling plant were sold in Antwerp via tender, achieving gross proceeds of ~US$1.5m and individual sale prices of up to US$15,000 per carat. Completion of the plant enabled the first commercial diamond recoveries to be delivered as the plant was progressively ramped up using kimberlite material from the South East domain of the Mothae kimberlite pipe. By the end of quarter, Lucapa had recovered 3,089 carats of diamonds from the processing of 78,426 tonnes of ore, including six diamonds weighing up to 78 carats. These diamonds included D-color white diamonds weighing 78 carats and 38 carats. The miner siad it achieved recovery grade of 3.94 carats per 100 tonnes (“cpht”) for the quarter – more than double the resource and forecast grades of 1.92 cpht and 1.83 cpht respectively. The plant is in its ramping-up phase and is on target to be operating at nameplate capacity (90,000 tonnes/month) in Q1 2019.

Meanwhile, Q4 diamond production at the company's Lulo Project in Angalo totalled 5,070 carats, which was 1% down on the previous corresponding period due to the processing of gravels from lower-grade areas. This took annual production for 2018 to 19,196 carats, up 3% on the previous year. Lulo continued to regularly produce large and premium-value diamonds throughout the quarter, including 50 'specials' (diamonds larger than 10.8 carats) for an annual total of 214. The specials recovered during the quarter included three +50 carat diamonds, the largest being 75 carats. Lulo alluvial mining company SML achieved gross revenues of US$6.0 million from the sale of two parcels of Lulo diamonds during the quarter, averaging US$1,118 per carat. For the year, Lucapa achieved sales of US$26.4 million (-16% from $31.6m) at US$1,313/carat (-21% from $1,669/ct). The miner clarifies that the sales and average price per carat figures for Q4 and FY2018 do not reflect the true value of the production and strong operating results achieved during these periods, as Lucapa withheld seven exceptional, large and premium-value Lulo diamonds for a later sale under Angola’s new diamond marketing policy (see above).