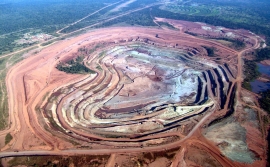 The Angolan government approved reforms last year that will open sales to a wider range of buyers, wheras previous rules forced producers to sell their sell their diamonds to a list of buyers Sodiam selected, below international prices. The first sale will take place on 31 January, when Endiama and Angolan diamond trading company Sodiam plan to auction seven outstanding quality stones mined by Australia’s Lucapa Diamond Co. at the Lulo concession. The tender will mark a significant milestone for the Angolan diamond mining industry, being the first Lulo diamonds offered for sale at international tender under the new diamond marketing policy. The auction will include seven diamonds of exceptional quality, including a pink 46-carat stone and six white stones with weights ranging between 43 and 114 carats. The new regulations allow companies such as Lucapa to offer 60% of their production to clients of their choice, ending the sale of diamonds to preferential customers.

Endiama has targeted its production forecast for 2019 at 9.5 million carats of diamonds and revenues of US$1.3 billion at an average price of US$154 per carat. Endiama expects revenue to continue growing, offering up a figure of $2.1 billion by 2022. Officials have also said that by the year 2021, Angola can be among the world’s leading diamond producers. “We have been among the five biggest producers of diamonds in the world and we believe that we are in condition to reach, in 2021, the top three spot at international level”, said the chairman of Endiama.