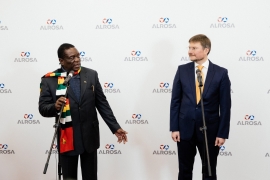 Russia’s Alrosa, the world's largest diamond producer, has announced its intentions to resume its diamond mining operations in Zimbabwe, which it had put on hold since 2016. The company will develop new mining operations with the support of the government, Alrosa said Monday as Zimbabwe’s President Emmerson Mnangagwa visited Moscow to try and attract investment in the country, which Mnangagwa previously declared is "open for business". Alrosa opened an office in the country’s capital Harare in early December, but the first employees, including geologists and mining engineers are expected to arrive later this month.

"Today we see opportunities for a new stage of our partnership," said Alrosa CEO Sergey Ivanov. "We are ready to develop new joint projects for diamond exploration and extraction. We also seek to support Zimbabwe in the development of its diamond-mining industry in line with industry’s best practices." Those 'best practices' were decidedly absent in Zimbabwe under the rule of former president Robert Mugabe. However, since he took power a year ago, President Emmerson Mnangagwa has been vocal about promoting a new era for Zimbabwe’s economy and tackling corruption, and his government is making moves to end the country’s international isolation and attract foreign investment to boost its struggling economy. Management of Zimbabwe’s diamond industry has been called a litmus test of the new government’s commitment to economic reform.

Cooperation with one of the diamond industry's most established and transparent companies certainly seems like a step in the right direction. "We are happy to share with our partners a wealth of experience in the field of mineral exploration and diamond mining, including the industry self-regulation and responsible business," Ivanov added. Negotiations held in 2018 by ALROSA and the leadership of the Republic of Zimbabwe resulted in a decision to start operations in the country and open ALROSA’s subsidiary. This company will implement projects for exploration and mining operations with a view to establish joint diamond and other ore mining enterprises.

Zimbabwe is said to be considering waiving a rule that prevents foreign investors from holding controlling stakes in its diamond mines. Late last year, President Mnangagwa introduced a partial repeal of a controversial indigenization law passed under former president Robert Mugabe that had limited foreign ownership of local businesses to 49 percent, hoping to attract both domestic and international investment by implementing investor-friendly policies. This repeal, which entered into into effect from April 2018, excluded diamonds and platinum, but as of early 2018 Zimbabwe was considering lifting the 51% government ownership law on those resources as well. As of late 2018, however, its Minister of Mines and Mining Development Winston Chitando was still saying Zimbabwe was not planing to change its ownership rules for diamonds and platinum.