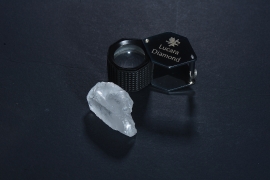 Lucara Diamond Corp. has recovered a 127 carat, top white gem diamond from its 100% owned Karowe Diamond mine located in Botswana. Since mining began at Karowe in 2012, a total of 129 diamonds in excess of 100 carats have been recovered, including an astounding 33 in 2018 alone. By way of comparison, Gem Diamonds, famous for its large diamond recoveries from the Letšeng mine in Lesotho, recovered a record 15 stones larger than 100 carats this year. Lucara's haul since 2012 includes 12 diamonds larger than 300 carats in size, of which 5 were recovered in 2018. In addition, Lucara has sold 180 diamonds in excess of $1 million each and ten diamonds have sold for in excess of $10 million each.

"The recovery of this latest, high value, top white 127-carat diamond attests to the remarkable nature of the Karowe orebody, which has consistently delivered large, high-value diamonds throughout its history," said Lucara CEO Eira Thomas. "2018 was a banner year, having recovered a record number of Specials (diamonds >10.8 carats in size) and in 2019, mining will be largely focused on the high-value south lobe, including contributions from the newly refined EMPKS unit which is now understood to be the source of both the historic 1,109-carat Lesedi la Rona and the 813 carat Constellation, which sold for a record US$63.1 million. The Karowe Diamond mine currently boasts open pit reserves of 2.6 million carats extending out to 2026 and is in the process of completing a feasibility study that could expand mining underground to 2036 and beyond."