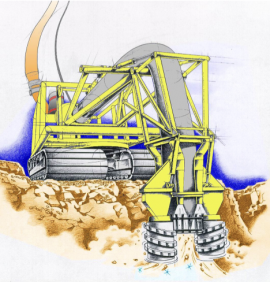 Canadian-based and TSX-listed company Diamond Fields Resources Inc. (DFR) recently announced the shipment of a 25,152-carat parcel of rough diamonds to Antwerp for independent valuation, deep-boiling and initial sorting in preparation for sale. The diamonds were recovered from the ML111 licence offshore Namibia during the first 25 days of mining, between November 11 and December 5, 2018. The shipment is the first since mining restarted, having been on hold since 2016.

Historical diamond production (from 2001-2008 and 2016) from ML 111 area has delivered 95-98% gem quality stones. The 2016 Bulk Sample (July 10 to September 10, 2016), recovered 26,965 carats which were sold in Antwerp at a price in excess of US$250 per carat, although the company notes there can be no assurance that these results will be repeated. At the time, DFR said their 2016 bulk sampling program produced results that were, "extremely encouraging, with an unexpectedly high frequency of large, high-value stones." The ML 111 concession has a ten-year mining license, effective from 5 December 2015 until 4 December 2025. Last year, Sybrand Van Der Spuy, CEO of DFR, said: “We are pleased to confirm that diamond mining at our offshore Namibian concession ML111 is expected to re-commence as planned in 2018. Historic mining results at ML111 have been excellent with the production of up to 98% gem quality diamonds that have commanded favorable prices.”

Mining at ML111 is expected to continue until the middle of January 2019 before a review of initial operational performance is undertaken. The initial six months (non-continuous) mining program is then expected to recommence later in 2019. DFR mines the Namibian waters with a 150-meter long mining vessel, the “Ya Toivo”, which is the only ship other than De Beers' vessels that is capable of developing offshore diamond production. The vessel is equipped with a 4 point-mooring-system, integrated anchor-assist and a dynamic positioning (DP2) system which combine to safeguard the vessel remaining in station in all weather conditions. The vessel is further equipped with a Remotely Operated Subsea Tractor (ROST), launch and recovery system for subsea tool handling. The mined material is slurry pumped from the sea bed through a special riser system into the fully integrated diamond 150 ton/hour dense media separation (DMS) processing plant.