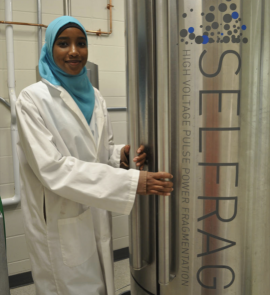 Hamdi Ali, a 17-year old high-school student from Canada has discovered a new way to extract diamonds from kimberlite rocks, according to a report from the University of Alberta where she was conducting summer research. She discovered that using SELFRAG high voltage pulse power fragmentation technology on the kimberlite rocks enabled recovery of diamonds that would have been crushed if established extraction methods had been used.

Ali’s research was conducted under the supervision of Graham Pearson, professor in the Department of Earth and Atmospheric Sciences and graduate student Margo Regier. Diamonds are usually extracted by crushing rock samples and sifting through the resulting debris. Ali’s research was to explore how a new tool, the SELFRAG lab system, could help electrically separate the diamonds and allow them to be recovered with slightly less damage than can occur in the traditional crushing method. The results were more than slightly promising and clear even from the first test. “The first experiment that Hamdi made with the SELFRAG machine was astonishing,” said Pearson, renowned for his boundary pushing discoveries of super-deep diamonds and water in Earth’s mantle.

As Regier correctly assessed, Ali’s findings have caught the interest of the diamond industry. “Maximizing diamond recovery is essential for producing a responsible and sustainable mine,” said Regier. “We realized that this was an important result that could have large impacts for industry.” Ali did not know how significant her findings were until she had the opportunity to present them to some De Beers Group Exploration employees while they were coincidentally visiting the the University of Alberta as part of the company’s support for the university’s various diamond research projects. Even the manufacturers of the SELFRAG machine were unaware of this potential application of the equipment. Most recently, Ali, Pearson, and Regier travelled to the Northwest Territories to share the discovery at the Yellowknife Geoscience Forum, a three-day event focusing on the latest in geoscience in a province with an active mining and diamond industry. Ali's research was conducted through the Women in Scholarship, Engineering, Science, and Technology (WISEST) Summer Research Program at the U. of Alberta.