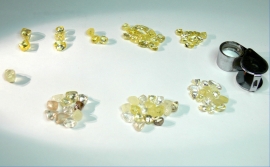 The company says they have defined numerous high grade targets using the latest in ground penetrating radar technology, and is conducting systematic bulk sampling at areas of alluvial gravel targets, which will lead to  trial mining of the best grades. A diamond-bearing alluvial channel named Terrace 5 extends over 40km of the project area, and is 200 to 500m wide. The largest diamond recovered to date there weighed 8.43 carats, and the company says it commonly recovers high quality stones larger than two carats, with a significant number of Fancy Yellows, for which the region is famous. GIB has submitted a bid for the former Ellendale Diamond Mine lease, currently under government control. Ellendale was the world's leading producer of fancy yellow diamonds, and in 2010 Tiffany & Co negotiated exclusive rights to the fancy stones for the full economic life of the mine. Its previous owner, Kimberley Diamonds Ltd., ceased operations and left the property behind in 2015.

GIB believes the acquisition of the Ellendale lease would be "transformative" for the company, and believes the government might select a new operator in the second quarter of 2019. GIB Executive Chairman Jim Richards commented, "The core focus of Gibb River Diamonds is to initiate bulk sampling and trial mining operations at the Blina Diamond Project. With permitting to mine now in place, this next exciting phase of operations is now scheduled to commence at the end of the wet season early next year."