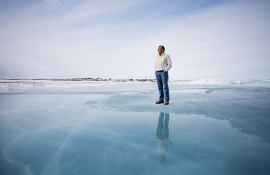 Dominion Diamond Mines CEO Patrick Evans has left the company after just over a year at the helm. The former chief executive of Mountain Province Diamonds, a position he held for twelve years, was brought in to lead the the world's third largest diamond producer by market value and Canada’s largest independent diamond producer after last year's $1.2 billion acquisition by billionaire Dennis Washington of Washington Companies. Shane Durgin, Dominion’s chief operating officer, took over as CEO effective Dec. 7. Evans plans to stay on as an adviser until the end of 2019.

Danielle Bochove and Thomas Biesheuvel of Bloomberg News point out that Evans is at least the third high-profile departure in less than a year at the Canadian miner. According to a memo Bloomberg obtained from Washington Companies, Evans joined the company last year “to oversee and ensure a smooth transition following the acquisition of Dominion Diamond Mines by Washington." Dominion has stakes in two diamond mines in Canada's NWT: It holds a controlling interest in Ekati, the country’s first diamond mine, and a 40 percent stake in the nearby Diavik mine, which is operated by joint venture partner Rio Tinto Group. The Ekati mine officially began production in October 1998. The Misery pipe is transitioning from open pit to underground mining in 2018, and is expected to fill a production gap between 2020 and 2023. Dominion planned on the Jay pipe to add 84.6 million carats to Ekati’s production, extending its life span by approximately 11 years to beyond 2030, but development of that project has been on hold and there are concerns about its economic feasibility.