Zimbabwe Not Planning To Change Ownership Rules for Diamond Mines 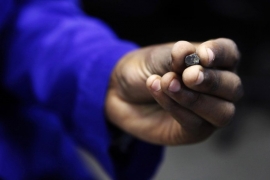 Zimbabwe does not plan to change its ownership rules for diamonds and platinum, its Minister of Mines and Mining Development Winston Chitando told Reuters on Monday. Late last year, Zimbabwe's president, Emmerson Mnangagwa, introduced a partial repeal of a controversial indigenization law passed under former president Robert Mugabe that had limited foreign ownership of local businesses to 49 percent, hoping to attract both domestic and international investment by implementing investor-friendly policies. This repeal, which entered into into effect from April 2018, excluded diamonds and platinum, but as of early 2018 Zimbabwe was considering lifting the 51% government ownership law on those resources as well.

Speaking on the sidelines of an investment conference in London ealier this week, however, Chitando said there would be “no change” for diamonds and platinum when asked about industry speculation the indigenization rules could be relaxed further. However, Reuters adds, an official from a junior miner developing a project in Zimbabwe said on condition of anonymity, he still believed there could be flexibility if miners were, for instance, investing heavily in the local community. And indeed, Chitando said the country was determined to bring about change and over the coming weeks would roll out policies for various minerals, including diamonds and gold. While the indigenization rules - insisting the state holds 51 percent of platinum or diamond mines - remain in place, Chitando said the diamond policy would focus on developing greater value from the industry, for instance, by trying to ensure the cutting and polishing of stones takes place in Zimbabwe rather than in other countries.