BlueRock Diamonds Making The Grade at Kareevlei Mine, S.A. 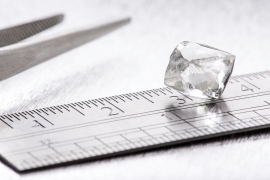 BlueRock Diamonds plc, the AIM listed diamond mining company which owns and operates the Kareevlei Diamond Mine in the Kimberley region of South Africa, has announced that the grade resulting from mining the first level of its latest kimberlite pipe "exceeds expectations". BlueRock is currently mining two of the five pipes at Kareevlei, called the KV1 and KV2. It has now processed the first Level 1 ore (10m to 20m below surface) from KV1, totalling 20,500 tonnes, resulting in grades of between 3.90 carats per hundred tonnes (‘cpht’) and 5.11 cpht at an average grade of 4.51 cpht. The average grade in 2017 when mining exclusively from KV2 was 2.45 cpht and in H1 2018 was 3.17 cpht, also from KV2. KV1 has an inferred grade of 6.3 cpht.

Adam Waugh, CEO of BlueRock commented, “Our current focus at Kareevlei following our recent fundraise [£85,000, or $109,000] is to materially step-up and de-risk our operations with a view to supplying a regular feed of undiluted, higher grade kimberlite. The ore we are recovering from KV1 is very encouraging in that it is a higher grade than we would have expected in this near surface, diluted material. It is pleasing that grades improved during H1 at KV2, and with the early results from KV1suggests a stronger profile for both pipes going forward."

There are five known diamondiferous kimberlite pipes ranging from <0.5 hectares to 5.6 hectares. The Inferred Mineral Resource totalling 359,000 carats is based on three of the pipes, K1, K2 and K3. K4 and K5 are the smallest two pipes and have had very limited work carried out. Mining operations started in 2015 on K2, following an open pit mining plan to mine to a depth of 70m below surface. Mining at K1, which is 50 metres from K2, is now underway will be mined in conjunction with K2. Inferred resource. According to BlueRock, the Kareevlei mine produces very high quality diamonds. The average value of all diamonds sold from Kareevlei exceeds US$300 per carat,placing it among the top 10 kimberlite mines in the world (ranked by average value per carat).