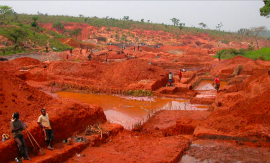 The Angolan authorities have shut down 279 diamonds sale and purchase houses, as well as canceled the activity of 122 co-operatives dealing in diamonds exploration, 52 days after the start of the “Operation Transparency”, announced last Wednesday in the northern Malanje Province, reports Angolan Press outlet ANGOP. “Operation Transparency” is essentially intended to fight illegal immigration, illegal exploration of diamonds and put a stop to environmental crimes committed in the ambit of the irregular prospecting of minerals. A police spokesman explained that the majority of the co-operatives were not declaring to the concerned state organs the diamonds sales they were doing.

As part of the operation, the authorities apprehended several instruments and equipment used in the irregular prospecting of minerals, as well as sized just over 23.2 million kwanzas (approx. $75,000), US$1 million and 944.520 South African Rands (approx. $66,000), plus over 12,000 karats of diamonds and 4,910 precious stones yet to be evaluated. The source also disclosed that in the ambit of the same operation over 400,000 illegal foreigners who resided in diamond-rich areas (mainly in the east, center-east, north and northeast of the country) have left the Angolan territory voluntarily, while 14,636 others were repatriated through administrative and judicial processes. Police Commissioner António Bernardo also assured that, throughout the operation, the authorities have been instructing officials to respect the principles of reasonableness, balance, proportionality and respect for human rights, although this has been called into question.