Stornoway CEO Manson To Step Down, COO Patrick Godin To Step In 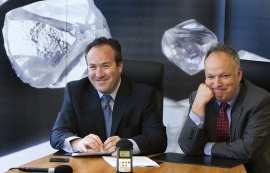 Stornoway Diamond Corporation has announced that Matt Manson will step down as President and CEO of the Corporation, effective January 1, 2019, and will be succeeded by Mr. Patrick Godin. Mr. Godin is currently the Corporation’s Chief Operating Officer, and has served in this role since 2010. So as to achieve an orderly transition in 2019, Mr. Manson will provide support to Mr. Godin as he assumes his new role.

Ebe Sherkus, the chairman of the Stornoway Board of Directors, commented: Matt has been the driving force behind the successful acquisition, financing and development of the Renard Diamond Mine. His determination and energy have been the key ingredients in the Corporation’s transition from junior explorer to mine developer and operator. He will be ably succeeded by Pat who, as COO and a director of the Corporation, has been responsible for the construction and development of both the open pit and underground mining operations at Renard and developing the Corporation’s positive relationships with employees, regulators, communities and stakeholders.”

Matt Manson commented: “Our ramp-up to design capacity at the Renard Mine has now been achieved, and carat production is growing. Our product is well established in the international diamond market, and the recently completed financing transactions have strengthened the Corporation’s balance sheet. Our priority going forward will be realizing the full operating and cash flow potential of the business over the long term." Patrick Godin commented: “I am pleased to be assuming the leadership of Stornoway through this next stage of its development. Working with our committed employees, partners and shareholders, our near term-term focus will be on delivering further performance improvements, adding to our reserve base, and maximizing free cash flow generation, while being on the lookout for value-creating growth opportunities over the longer-term.”

Prior to joining Stornoway, Pat acted as Vice-President, Project Development for GMining Services, and was responsible for the development of the Essakane Mine in Burkina Faso under contract to IAMGOLD. He was previously Vice-President of Operations for Canadian Royalties, specifically heading the development of their nickel project in northern Québec. He was also President and General Manager of CBJ-CAIMAN S.A.S., a French subsidiary of Cambior/IAMGOLD, holder of the Camp Caïman gold mining project located in French Guiana.