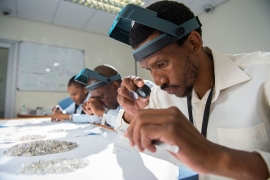 Lucara Diamond Corp.'s third quarter carat production from its Karowe mine in Botswana "exceeded expectations" as a result of increased efficiency in diamond recovery in the smaller sizes during 2018. The number of carats recovered in Q3 2018 (127,031 carats) was more than double the number of carats recovered in Q3 2017 (62,425 carats), but sales revenues lagged - even if one excludes the $53 million sale of the 1,109-carat Lesedi La Rona in Q3 2017 - as the recovery of smaller diamonds does not contribute materially to the company's revenue. The miner has raised its 2018 production estimate to 325,000 to 350,000, versus their previous estimate of 270,000 to 290,000 carats.

The miner sold $45.7 million (Q3 2017: $77.9 million) in rough stones during the quarter, or $450 per carat from $1,161 per carat, but third quarter sales from 2017 included the sale of the Lesedi La Rona (LLR) for $53 million ($47,777 per carat). Adjusting for the sale of the LLR, the Q3 2017 average sales price was $389 per carat. The volume of sales rose by 51% to 101,600 carats. Lucara also began setting aside diamonds in the one to fifteen carat size range in the better colors and qualities for sale on Clara, Lucara's secure digital rough diamond sales platform. The company notes that the removal of these diamonds from traditional tender sales will have an impact on the overall achieved average sales price, however, these differences will be captured and reconciled in the results reported through Clara. The inaugural sale on Clara is planned and tracking on schedule to take place later in November, 2018.

"Third quarter operational performance at Karowe exceeded expectations with respect to ore mined and carats produced, and reflects a seamless transition, three months ahead of schedule, to our new mining contractor, Trollope Mining Services," said Eira Thomas, President and CEO. "In parallel, we saw higher asset availability and record utilization rates for the process plant, positively impacting carat recoveries. Growth initiatives, focused on Clara and the Karowe underground expansion opportunity, also continued to pick up momentum during the quarter. Clara commercialization efforts are now complete, and we are pleased to be moving forward with our inaugural diamond sale later this month."

Despite the increase in carats recovered, revenue is expected to be in the range of $180 - $190 million (2018 guidance: $170 – $200 million). Lucara recovered 197 specials (single diamonds larger than 10.8 carats) during the third quarter, representing 4.7% weight percentage of total recovered carats, in line with expectations; 10 diamonds were recovered greater than 100 carats in weight