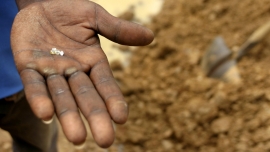 The Central African Republic (CAR) has made an appeal to members of the Kimberley Process (KP), whose Plenary meeting commences in Brussels today, to engage with the country to increase its rough-diamond exports. The CAR government has asked the KP family to approve the compliance of nine additional mining zones in the Western part of the country - in addition to the five areas already approved in 2015 - and to formallize the decision taken at the KP Intersessional last June to reduce the approval period for rough-diamond exports to seven days.

The statement issued this morning reads, "It is the intent of the CAR government to look for partners for structural reform of its artisanal mining sector to revive the normalization of its diamond trade and to combat the illicit activities and smuggling. At the same time, these partners for the future should engage in capacity building projects for the benefit of CAR’s youth." Leopold Mboli Fatran, Minister of Mines and Geology, says, “From the CAR government’s side, tax incentives will be considered. By the end of 2018, it is the intention of the CAR Government to announce a new policy to ensure the return of responsible diamond mining to the country.” The CAR government says that all the relevant mining zones are fulfilling the procedures of the administrative decision and the Operational Framework. Those include having the appropriate monitoring mechanisms in place, maintaining government control over the zones and ensuring there is no rebel-based armed group activity that might impact the internal controls in the diamond production or trade, the ministry explained.

However, the statement tacitly acknowledges that diamond smuggling is taking place, because the artisanal miners have not ceased mining despite a broad export ban on certain areas. Special Advisor Peter Meeus says,  “We believe a formalization of this decision [the seven-day delay] is essential for the way forward and to get good international companies engaging in artisanal and alluvial mining in the country. Actors in the field have also brought up that in the competition with the illicit trade, they are facing several disadvantages. More specifically, the fact that they can only export once a month is a big burden. They have requested that the 7-day approval process be formalized and that they could export every fifteen (15) days a certain volume of diamonds from the CAR.” Sanctions are still in place for diamonds mined in eastern CAR, where rebel groups remain active and have not adhered to a UN order to disarm, as the government has. This has taken a massive bite out of the revenue that the government of CAR receives from rough diamond sales, which has slowed to a trickle.