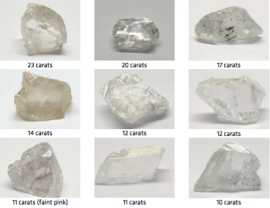 During initial tests of new flood plains being explored near the Lulo diamond project in Angola, Lucapa Diamond Company has discovered of a new alluvial source of large and premium-value diamonds. Lucapa reports a total of 1,502 carats recovered so far from 11,155 bulk cubic metres processed, achieving a diamond grade of 13.5 carats per 100 cubic metres. The sample included 17 specials (+10.8 carats), including an exceptional 55 carat Type IIa D-colour white The average size of the diamond recovered was 1.4 carats.

The junior miner explains that to this point, the diamonds mined from Lulo have been sourced predominantly from the terrace deposits along the Cacuilo River valley. The Lulo partners recently began exploring the extensive flood plains (leziria areas) along the ~50km stretch of Cacuilo River valley within the Lulo diamond concession to determine whether these areas were also host to exceptional alluvial diamonds. They say the positive results from the first of these flood plain areas tested – adjacent to Mining Block 31 – where the company regularly recovers specials, demonstrate the potential to open additional and expansive new mining areas at Lulo. Given the results from the flood plains adjacent to Mining Block 31, the company says, Lucapa and its partners will continue testing other flood plain areas at Lulo in parallel with alluvial mining activities in established areas.