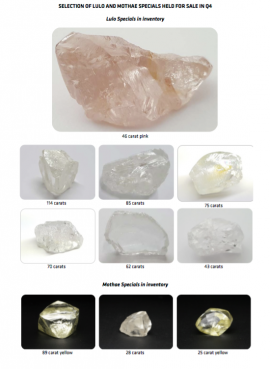 All signs are pointing upward for Lucapa Diamond Co. these days, with the exception of their rough diamond sales in Q3, which fell by 49% as the miner withheld several exceptional, large and premium-value specials (+10.8 ct.) for sale at a later date. This parcel (pictured) includes a 46-carat pink, and top-color Type IIa white diamonds weighing 114, 85, 75, 70, 62, and 43 carats respectively. The sale of these exceptional diamonds was delayed pending implementation of Angola’s new diamond marketing policy, one of the measures being introduced by the new Angolan President, Joao Lourenco, to increase foreign investment in the country’s diamond sector.

Lucapa believes it will obtain significant additional value from marketing these stones under the new policy, under which diamond producers will be able to determine which new competitive channels the majority of their product is sold through, and to which buyers. As Lucapa CEO Stephen Wetherall told us in early October, the use of multiple competitive channels for price discovery should result in producers achieving international market prices. Additionally, having access to premium-value diamonds from two sources (Lulo and Mothae) in Q4 will also enable Lucapa to advance its diamond value-adding strategy with leading global diamond traders, several of whom the miner says have approached the company with cutting & polishing partnership proposals.

Lulo mining company Sociedade Mineira Do Lulo ("SML", with Lucapa 40% and operator) achieved gross revenues of $4.5 million from two diamond sales during the thrid quarter ended September 30, a decline of 49% compared to the $8.9 million earned a year ago. Sales volumes declined 4% to 5,058 carats, while the average price realized in the Q3 sales was $893 per carat, a fell 47% declinbe from the $1,676 per carat obtained in Q3 2017. Actual year-to-date sales currently sit at $20.4m at an average price of $1,384 per carat, down from $24.3m earned during the first nine months a year ago, at an average price of $1,640 per carat. Production for the same period, however, increased by 4% to 14,126 carats. Lucapa’s rough-diamond inventory from Lulo has increased by 33% (2,272 carats) compared to a year earlier, at least in part due to the specials it withheld from its Q3 sales.

Lucapa says it made significant advancements across its various diamond projects during the September 2018 Quarter. In addition to mining large and premium-value diamonds at Lulo in Angola, it continued what it calls the "largest systematic kimberlite exploration programs in the diamond industry" at Lulo with the aim of discovering the hard-rock source(s) of its exceptional alluvial diamonds. The company also advanced to near-completion the construction of a second high-value diamond mine at Mothae in Lesotho, which it commissioned earlier this month. The miner looks forward to completing the next stage of exploration at the Brooking diamond discovery in Australia, including bulk sampling of the Little Spring Creek lamproite and drilling of other lamproite targets.

Last week, the company secured a $7 million investment from South Africa’s Industrial Development Corporation to develop its Mothae mine in Lesotho, which it acquired in January 2017. Lucapa expects the first commercial diamond recoveries from the asset in early November. Click the link above right for Lucapa's full Q3 Activitries Report.