Firestone Diamonds Off To a Promising Start in Q2 2019 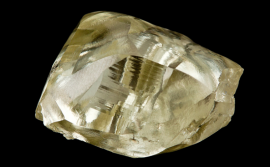 Firestone Diamonds posted solid production amid middling sales results in Q1 2019 (ended 30 September 2018), but its majority-owned Liqhobong Diamond Mine in Lesotho got off a strong start to the second quarter after selling its third most valuable stone to date. The start of Q2 was highlighted by the second sale of the 2019 financial year, where the diamond miner sold a total of 102,835 carats for US$8.2 million on October 26, including a 68 carat white diamond, the third most valuable stone sold to date for just under US$10 million, and a 20 carat yellow diamond. It also recovered a 326 carat near-gem diamond - the largest to date at Liqhobong.

The average value realized at the second sale of the year rose from to US$79 per carat, despite continued pressure on the run of mine (ROM) stones. This is an encouraging sign, as the company realized an average of US$70 per carat in Q1 and US$71 in Q4 2018. The average price earned continue to be below expectations mainly due to a deterioration in prices received for the smaller, lower value ROM stones. Production during Q1 totaled 240,733 carats recovered at a grade of 23.8 carats per hundred tons ("cpht"), both representing a slight downturn from Q4-FY18 when the miner recovered 263,512 carats at a grade of 25.7 cpht. Firestone treated 1,012,323 tons of ore, with a cost per ton treated of US$10.05 (Q4-FY18: US$10.98) substantially lower than FY19 guidance of US$15-16 per ton treated. The company attributed the cost decline to a combination of cost savings and continued local currency weakness against the US dollar.

"The first quarter was a good start to our financial year and it is pleasing that the positive operational momentum from the previous quarter was maintained," said Paul Bosma, Chief Executive Officer. "We held one sale during the quarter which was impacted by lower average values realised for the smaller, lower quality ROM stones. However, from a total revenue perspective, the impact was partly offset by higher sales volumes. We completed our second sale of the financial year post the quarter end, and pleasingly, the strong demand for our special stones offset the continued pricing pressure on the ROM stones, resulting in an improved average value realised of US$79 per carat. During October we also recovered our largest stone to date, a 326 carat near-gem diamond which provides further evidence of Liqhobong's large stone potential and importantly, the ability of the treatment plant to recover larger stones intact."

The company ended the first quarter with net cash of US$25.7mln, down from US$27.8mln at the end of the fourth quarter. The Liqhobong Diamond Mine is 75% owned by Firestone and 25% by the Government of Lesotho.