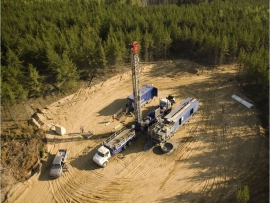 After a four-year wait, Star Diamond Corp. - formerly called Shore Gold Inc. - has received the green light from the provincial government to build a diamond mine in Saskatchewan, Canada, bringing to an end what is believed to be the longest environmental approval process in province history. The Star-Orion Diamond Project was first proposed by Shore Gold Inc. in 1995. In 2014, the Canadian Environment Assessment Agency announced a positive federal Environmental Assessment Decision for the Project to build the mine in the Fort à la Corne forest, but it has been on pause ever since due to hesitation on the part of the provincial government. As of yesterday, the long wait is finally over, as the province has finally overcome its last remaining concerns and signed off on the project.

Environment Minister of Saskatchewan Dustin Duncan has now announced approval for the Project under The Environmental Assessment Act, indicating that, “The Star-Orion South Diamond Mine is a major development with the potential to bring jobs to the area and diversify Saskatchewan’s economy.” A copy of the Project decision can be found here. In a statement from October 25, Minister Duncan said the $1.4-billion twin-open-pit diamond mine proposal has met government requirements. Pointing out that such projects only proceed after “appropriate environmental safeguards” are in place, he said, “I am confident this project has met these requirements and the conditions of approval will mitigate environmental and community impacts.”

Kenneth E. MacNeill, President and CEO of Star Diamond said in a statement that the approval, "marks a major milestone towards the development of a diamond mine in Saskatchewan. We have previously demonstrated that the proposed Star - Orion South Diamond Project can be successfully constructed and operated and are very pleased that the Project has now received positive federal and provincial environmental decisions." He adds, "As illustrated by the preliminary economic assessment, the Project has the potential to generate billions of dollars of corporate and municipal taxes and royalties, while also providing direct employment for hundreds of people throughout the construction phase and some 700 people continuously over its 38 year mine life.”

During 2018, Star Diamond Corp. announced the positive results of the independent Preliminary Economic Assessment (PEA) on the 100%-owned Star and Orion South Kimberlites. The PEA estimates that 66 million carats of diamonds could be recovered in a surface mine over a 38-year project life. The announcement will come as a relief to Star Diamond Corp. and its investors - writes Alex Macpherson for the Saskatoon StarPhoenix - who invested in the project only to grow increasingly frustrated by delays and languishing share prices. The approval is also good news for Rio Tinto. Star Diamond in 2017 granted Rio Tinto Exploration Canada an option to buy up to 60% of Star’s Fort à la Corne mineral properties (including the Star-Orion South Diamond Project) in stages for a total of about $75 million. Paul Zimnisky, an independent diamond industry analyst, said that while concerns about capital expenditures remain, the approval is likely the “last piece of the puzzle” when it comes to Rio Tinto’s diamond-intensive plans. “At this point, I think there’s a very high probability that it gets built.” Zimnisky said.

While the miners and investors are pleased, members of a local First Nations community - the James Smith Cree Nation - will most likely not welcome the announcement. A consultant hired to speak for the First Nation told the newspaper earlier this month that Star Diamond’s environmental plan was “hopelessly flawed", and the community worries the mine will impact the surrounding environment, water resources, and affect a sacred hill used by the community.