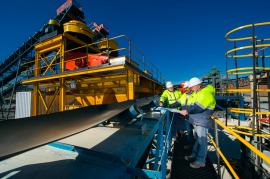 Petra Diamonds, with mining operations in South Africa and Tanzania, has released a promising and much-needed set of results from Q1 2019 (July 1 to September 30), reporting a 21% increase in diamond production and a 22% rise in revenue in the last three months. Following a difficult two-year period of rising debt as a result of expansion projects and acquisitions, rocky ramp-ups at the Cullinan and Finsch mines and a slump in share prices that led to long-standing CEO Johan Dippenaar announcing he would step down from his post, the company seems back on track, expecting to generate free cash flow in FY 2019

Petra's Q1 Trading Update said output rose 21% to just under 1.07 million carats, mainly thanks to a 25% increase in its run of mine production across its operations to 1.02m carats, which offset planned reduction in tailings recoveries at its Finsch mine. Revenue for the period was up 22% to $80.2m from the sale of 626,541 carats. Diamond prices were down by about 5% on a like-for-like basis due to the usual seasonal weakness, but Petra benefited from a weakening South African rand, which lowered operational costs. Petra said it remains on track to generate free cash flow in FY 2019 and reiterated its full-year production guidance of around 3.9m to 4m carats. However, the company said its net debt increased to $538.9m at the period end, versus $520.7m at the end of June.

Petra CEO Johan Dippenaar said: "The first quarter of FY 2019 shows solid operational delivery, underpinned by strong safety performance, with the ramp-up of our expansion programmes leading to a healthy increase in run of mine carat production, thereby supporting our expectation of free cash flow generation and subsequent debt reduction." The company also notes that the new South African Mining Charter, which was published on 27 September 2018, has served to remove uncertainty and has addressed a number of concerns.

RBC Capital Markets analyst Tyler Broda said this was a "refreshing" quarter, with production improving across most of the mines, including Finsch and Cullinan where production guidance had recently been downgraded. He also noted that diamond prices continue to struggle. "Risks around the ongoing ramp ups still remain and the general diamond market is yet to see signs of recovery with small diamonds most exposed to price fluctuations."

Image: The Bulk Sample Plant – Crushing Plant at the Finsch mine, courtesy of Petra Diamonds