In Depth with Stephen Wetherall, CEO of Lucapa Diamond Co. 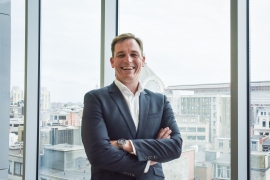 CEO of Australia’s Lucapa Diamond Company, Stephen Wetherall, paid a visit to Antwerp recently, where The Diamond Loupe caught up with him. We encountered an optimistic CEO that is clearly excited about the future of Lucapa, and justifiably so. The growing miner operates, together with its partners in Angola, the highest-value and most promising alluvial diamond project in the world - the Lulo Diamond Project. Their Mothae mine in Lesotho will commence production in a matter of weeks, their Brooking Diamond Project in Australia has delivered hugely promising early returns and they hope to find diamondiferous kimberlites at their 100%-owned Orapa concession in Botswana. We discussed Angola’s new Diamond Trading Policy, the start of production at Mothae and the decision to market those goods in Antwerp. Read the complete interview here.

The Diamond Loupe: Angola recently introduced what the country calls “a profound reform” in its mineral resource sector and diamond marketing policy. What are the key issues this policy addresses, and are the changes going to open up your market?

Stephen Wetherall: I believe they will. The changes being made are significant. The main reason they are being implemented is to drive inward investment. Angola wants to grow its mining sector, particularly in diamonds. The key objective of the new policy is indeed to implement major reform, to improve the attractiveness and competitiveness of the national diamond industry and grow outside investment into Angola, so mining contributes more to the Angolan fiscus.

More specifically, the policy intends to achieve this growth by establishing an effective system to ensure greater transparency and predictability in the rough buying and selling process, in order to maximize value and price stability. It is also designed to increase control and simplify revenue collection to ensure the government realizes the optimal value from its resources. They will standardize price setting and implement international models for rough diamond sales, such as sights or preferred clients, spot sales or seasonal clients, and conduct tenders or auctions. And they will promote cutting and polishing in the country, as well as the internal jewelry market. In summary, they are evidencing to the world that this new marketing policy will safeguard the legitimate interests of producers, introduce a more transparent way of valuing the product, and will bring in multiple better sales channels through which the miners can access a fair market price.

“If you wait until tomorrow, you might be too late.”

What sort of benefits do you expect to derive from the policy as a company operating in Angola? Do you anticipate systematic changes will be felt immediately?

SW: The changes will be quite significant for diamond mining companies in Angola. Once the technical regulations for the new diamond marketing policy are gazetted and in force - which is expected at the end of October or early November - producers will likely have the ability to determine which new channels the majority of their product is sold through, and to which buyers. This ‘majority’ has been said to be up to 60% of production and the ability to use multiple competitive channels for price discovery will result in producers achieving international market prices.

Some people will say they have heard this all before, and nothing will change. Do you think it will take some time before investors regain confidence in Angola?

SW: Our company has been there since 2007. I have been with this company for four years. The previous company I was working with (Gem Diamonds) also had projects in Angola. So, we have a lot of experience there. I am on the ground and I see the changes they have been making and the efforts being made to do that. The ability to own majority stakes in new developments and new projects is a major step. It has generated a huge amount of interest from international mining companies, and it is going to happen. If you wait until tomorrow, you might be too late.

How do you plan to conduct your diamond sales under the new policy?

SW: There are many different means to achieve better prices. Conducting tenders or auctions is one such means, with Lulo inviting as many buyers as possible to view its production and let them bid in a competitive environment. As I mentioned, we have to wait for the technical regulations to be published later this year. And, of course, Sodiam will still be involved. It might be a slightly different structure, but the government still needs to control the flow of diamonds, record the diamonds, manage the KP certification process as well as the export of diamonds. Sodiam will still perform those functions. But as I mentioned, up to 60% of product from the miners should go to channels they believe are most suitable.

Search for the source at Lulo

Concerning your search for the kimberlite source of Lulo’s large and high-quality alluvial diamonds. Is it a situation where you can say, given certain indicators, you are getting close?

SW: The honest answer is, if we knew, we would have it. But certainly, regarding the indicators you mention, they are really exciting and off the charts compared to other exploration projects. What if I were to say to you that on top of that anomaly I am about to drill, I have recovered a 404-carat stone, 227-carat, 173-carat? We have recovered approximately 800 diamonds of +10.8 carats and above on top of our kimberlite targets at Lulo. So, what are the chances of the kimberlites being diamondiferous? Very, very good. The other anomaly at Lulo, when compared to any other project, is that we do not have one or two ‘pings’ across a huge area. There is not just one target below these magnificent alluvial fields, we have 300 pings. Therein lies our work to be done.

If you find it, what would that mean for Lucapa?

SW: It would mean a different valuation for us as a company. If we put the hole in the source there, it will be one of the most special mines in the world, if not the most special mine in the world. When you look at the grades we are getting from our alluvial goods and the value of the product we are getting, the source can only be very special. That is what we are looking for. If we are successful, there will be a significant re-rating for us as a company.

Mothae Mine on schedule, production headed to Antwerp

Moving on to the Mothae mine … There was skepticism in the industry about it turning into much, but it seems like you have quickly obtained better results than expected.

SW: If you talk to diamond experts, the guys that are on the ground and do the work, Mothae is a very special pipe. It is a low-grade, high-dollar per carat environment, like Gem Diamonds’ Letšeng mine, and like our Lulo. Huge volumes of ore are needed to assess the potential in the ground. Lucara committed to that program and were halfway through - they were up to 600,000 tons into a million-ton program. But at the same time, they started discussing with African Diamonds to acquire AK6, which has become Karowe. That was a bigger pipe than Mothae. They needed money to fund it, decided there was greater scope in Karowe and went and developed that. Look what it has become. Great decision. No two ways about it. But that left Mothae lingering for others to consider, and it is a great resource.

Lucapa said last June that construction of the new, 150-tonne per hour plant at Mothae was on schedule for commissioning in the second half of the year. Are you still on target?

SW: Absolutely. Mothae is well on track to commence commissioning of the main modules of the 1.1 million tonne per annum treatment plant. This will see Mothae ramp the tonnage up progressively to 90,000 tons per month over the fourth quarter of 2018 and be in a position to treat 1.1 million tons for 2019. We told the market we would start commissioning in Q4, but it will be early Q4. We are going to start turning the drives in a couple of days, and I look forward to some ore going through in the next few weeks.

The first parcel of 2,500 carats from Mothae was sent to Antwerp for cleaning and valuation. Do you plan to market your goods in Antwerp?

Yes. We are very excited that the Mothae mine has exported its first parcel of bulk sample diamonds for cleaning, valuation and ultimately sale. Lucapa, in conjunction with its Lesotho government partners, invited a number of proposals from diamond marketing agents in terms of how to market and where to market the Mothae product. At this point in time, after a detailed review, Mothae decided to send its diamonds to Antwerp for sale.

At the Brooking Project in Australia, you recently had an amazing result at Little Spring Creek. Did that surprise you?

Absolutely. The work done by the previous companies and our confirmatory sampling gave us the confidence to invest in the project. The micro-diamond recoveries from the areas that had been tested gave us excitement, but in the diamond game, you don’t trust everybody. An old boss of mine said, “Always, do your own work” in the diamond space. With that in mind, I sent our own teams up there. We did our own work and repeated those recoveries. We then signed the commercial agreement to acquire 80% of the project.

We were expecting diamonds at Little Spring Creek (LSC), but we were not expecting 119 micro and macro diamonds in the first 78 kg of drill core. A very exciting recovery. We then did some more groundwork, defining the signature of the anomaly more clearly, moved the drill program more toward the center of that anomaly, and recovered 1,100 micro-diamonds in 178 kg of core. Fantastic results. LSC is not a huge pipe, but it is exciting enough.

Final question. In Lucapa’s presentation from the Africa Down Under Conference in August, I see that your value chain stretches into cutting and polishing. Could you tell us about that?

SW: There are two aspects as to why a miner would want to go that route: to attract the highest value and to mitigate the risk we take in developing a mine. We take an enormous risk in trying to find a resource, in evaluating that resource and building a mine to extract value out of the ground. We then sell a stone to someone that only takes a risk at that point when they buy it. I am not saying the price is right or wrong, as they have to calculate their own risks in terms of manufacturing it, and whether they can move it.  How long will they have to hold it in inventory, and so forth? But when you have a very special product as we do at Lulo and Mothae, and you see what happens to those stones down the line and the value that is accreted on the jewelry and polished stones - it would be wrong of me not to assess whether we can recuperate some of that value for our projects. That is what we are trying to do.

I love that part of it. I did not really love the diamond space until I got into marketing the diamonds. When you are in the group finance team or are assessing projects, it is all at a distance, looking at modeling, etc. But when you see the rough product, feel it and fall in love with it, and then you sell it and see what happens to it afterward as it moves through the value chain, that is when the industry really grabbed me. I really enjoy it.