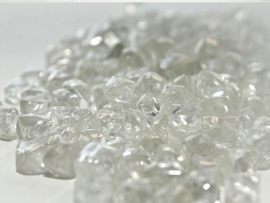 Diamond Fields Resources (DFR) has confirmed, via its subsidiary Nutam Operations (Pty) Ltd, that the mining vessel "Ya Toivo" is scheduled to enter Namibian waters during the first week of November 2018. Once in position, the m/v Ya Toivo will commence mining operations on the ML111 license area, which is held by DFR through its Namibian subsidiary Diamond Fields (Namibia) (Pty) Ltd.

In November 2017, International Mining and Dredging Holdings and its local subsidiary presented DFR with an initial six month (non-continuous) mining program. The parties expect to review operational performance during the initial term to find a sustainable balance for the sharing of future exploration and mining costs, particularly in relation to further resource and reserve development. Sybrand Van Der Spuy, CEO of DFR, said: “We are pleased to confirm that diamond mining at our offshore Namibian concession ML111 is expected to re-commence as planned in 2018. Historic mining results at ML111 have been excellent with the production of up to 98% gem quality diamonds that have commanded favorable prices.”

As Van Der Spuy mentioned, historical diamond production (2001-2008 and 2016) from ML 111 has been 95-98% gem quality. The 2016 Bulk Sample, taken over 62 days (July 10 to September 10, 2016), recovered 26,965 carats which were sold in Antwerp at a price in excess of US$250 per carat, although the company notes there can be no assurance that these results will be repeated. At the time, DFR said their 2016 bulk sampling program produced results that were, "extremely encouraging, with an unexpectedly high frequency of large, high-value stones." The ML 111 concession has a ten-year mining license, effective from 5 December 2015 until 4 December 2025.