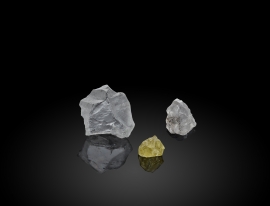 Rio Tinto and Dominion Diamond Mines have revealed three of the finest large rough diamonds from their Diavik diamond mine in Canada, which will be showcased in Antwerp and Israel before being tendered to diamond specialists from around the world. The three rough diamonds, collectively named “The Diavik Stars of the Arctic”, will highlight a rough diamond tender of 'specials' (diamonds weighing more than 10.8 carats) before bids close on October 25.

The Diavik Stars of the Arctic, according to Rio Tinto's statement, "showcase a rare combination of size, quality and color from the Diavik diamond mine in the remote Northwest Territories of Canada, 220 kilometers south of the Arctic Circle." The Diavik Stars of the Arctic comprise: Vega of the Arctic, weighing 177.71 carats, it is one of the largest and most valuable gem quality rough diamonds ever produced in Canada; Altair of the Arctic, weighing 59.10 carats, a beautiful white gem quality rough diamond; and Capella of the Arctic, at 24.82 carats, it is a dazzling yellow diamond, the miners note. The discovery the large yellow diamond is very rare, the company says, with the mine on average producing only five of these diamonds each year, in effect less than 0.001 percent of annual production.

Diavik Diamond Mines president and chief operating officer Patrick Boitumelo said "Diavik diamonds are over two billion years old and it has taken 15 years of production to unearth these extraordinary diamonds, underscoring the ongoing importance of the Diavik orebody in the context of the global diamond industry." The Diavik Diamond Mine owned by Rio Tinto (60%) and joint venture partner Dominion Diamond Mines (40%) began production in 2003 and has been a fully underground mining operation since 2012. It recently opened its fourth pipe, the A21 pipe, which will provide an important source of incremental production.