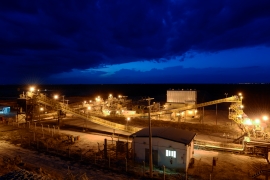 The 7th Brazilian Conference on the Geology of Diamonds to be held in Salvador, Bahia is attracting speakers and delegates from around the world, the organizers write in a press release. The event, which focuses on the diamond producing industry, will highlight the diamond potential of Brazil, its geology, and new discoveries and developments in the sector. The conference will be held at the Deville Hotel and Conference Centre from November 4 to 7, 2018.

Paul Zimnisky, a diamond analyst and one of the principal names in the international industry, will be the key-note speaker and will give delegates his views on the current state of the natural diamond industry, and where he sees the industry heading in the future. Dr. Barbara Scott-Smith, a world-renown kimberlite specialist will provide delegates with insight into a new standardized kimberlite terminology that is now being used at most producing diamond mines in the world. There will also be presentations on the Braúna diamond mine of Lipari Mineração Ltda., Brazil’s largest diamond producer and the first commercial mine in South America which was developed on a kimberlite deposit.

Ken Johnson, President of Lipari and the President of the conference organizing committee said that “the purpose of this conference is to highlight the immense diamond potential of Brazil. Prior to the discovery of diamonds in South Africa in 1867, Brazil was the world’s largest diamond producer for almost 150 years. All of the historical production was derived from alluvial deposits, despite the fact that there are now over 1,340 kimberlites discovered.  Our Braúna mine is the first kimberlite deposit to be put into commerical production, with an annual production of approximately 230,000 carats per year.  Following the success of Lipari’s Braúna development, diamond explorers and producers are now starting to look at Brazil as a prospective area for diamond exploration. There is an industry waiting to be developed here, it just needs investment and know-how. This will be the focus of this year’s conference.”