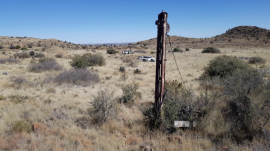 Botswana Diamonds has identified the potential of the Free State in South Africa to host additional commercial kimberlites following archival research concerning the history of diamond mining in South Africa. This research, first discussed in August 2017, found that in addition to the well-documented iconic operations at Jagersfontein, Koffiefontein and Kimberley, a number of smaller diamond mines existed in the area, but knowledge of them had essentially been lost over the course of history and as a result of bureaucracy. Following the initial library research and ground truthing, the company turned to modern science, which has confirmed the existence of eight diamondiferous kimberlites exhibiting Group 1 geochemistry similar to the larger producing mines of Kimberley and Koffiefontein - enough evidence for the company to justify moving ahead to a phased drilling program.

As the company explains it, their archival research found that in addition to the law at the time not requiring formal documentation of any diamonds discovered, there was extensive document loss and destruction due to the Anglo-Boer war of 1899-1902. In spite of this, much is still available and there is considerable anecdotal evidence of a history of diamond mining. The industry there was active up until the early 1880s, but "a wave of financial collapse and depression swept over South Africa...." such that ..."even old established diggings like Jagersfontein, Dutoitspan and Bultfontein were partially abandoned and younger [smaller] mines.... were totally deserted". Attempts were made to re-open these "smaller" mines in the early 1900s, but these were frustrated through bureaucratic intervention prior to the accession by the Free State Colony into the Union of South Africa. As a result, permission to restart the mines was not granted, they have never been reopened, and their history was lost with land ownership changes over time. (See Botswana Diamonds' essay on the mining history of the area and the prospecting rights of partner Vutomi Mining).

Piecing together the past, eye on the future

Using aerial imagery and ground truthing, Botswana Diamonds has started to piece the puzzle back together, enabling them to focus on areas within its Koppiesfontein, Poortjie, Swartrandsdam and Tafelbergsdam properties where historic workings and abandoned equipment are clearly evident. Archived diamond certificates issued in 1898 regarding exploration activities around Tafelsbergsdam disclosed recovery of 111 carats of diamonds valued at approximate £93 each, which the company is estimates to be in excess of US$300/ct in today's money. Armed with archival evidence, Botswana Diamonds started taking ground samples for whole rock geochemistry tests by the Council for Geosciences, followed by detailed ground geophysics which produced minimum sizes for the two clusters of eight kimberlite pipes of between 0.3 and 1.15 Hectares. These sizes were determined using a combination of magnetic, electromagnetic and gravity geophysical techniques, which has resulted in strong images of the footprints of these kimberlites.

For the next step, the miner undertook mineral chemistry work to rank the kimberlites from the perspective of diamond-bearing potential. The analyses of 3,100 garnets and spinels at the University of Johannesburg indicate high abundances of diamond inclusion type chemical compositions, thereby rating these kimberlites as being of high interest in terms of diamond bearing potential. The chemical signatures resemble those in the neighboring iconic mines at Jagersfontein and Koffiefontein. As the mineral chemistry result supports the conclusions from the previous whole rock geochemistry, the geophysics and field observations, the Botswana Diamonds' Directors believe it justifies moving to a phased drilling program, with the timing to be announced in due time. John Teeling, Chairman, commented, "The Free State story is a fascinating one. Starting from document archives from well over a hundred years ago where some of these kimberlites were diamond producers, to modern exploration using whole rock geochemistry, kimberlite mineral chemistry through to detailed ground geophysics. The next step is clearly drilling to determine the kimberlites current commerciality."