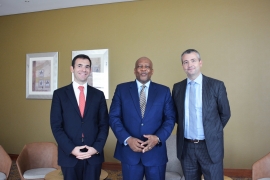 Ari Epstein, CEO of the Antwerp World Diamond Centre (AWDC), along with several representatives from the Antwerp diamond industry today met King Letsie III of Lesotho in Brussels. Lesotho, a mountainous country fully surrounded by South Africa and numbering only two million inhabitants, is the world’s seventh most important diamond-producing country in terms of value. Lesotho’s entire diamond production, worth $342 million in 2017, is traded on the Antwerp market.

Lesotho is widely known for yielding some of the largest and highest quality diamonds in the world. One of the most famous diamonds unearthed in the country is the Lesotho Promise, a rough diamond weighing 603 carats that Gem Diamonds recovered. It was sold to Laurence Graff for $12.4 million and polished in Antwerp into a necklace of 26 stones - now valued at more than $60 million. (Watch “The Story” of the Lesotho promise).

In addition to the famous Letšeng Mine operated by Gem Diamonds - which has already set a new record in 2018 for the largest number of 100+ carat diamonds recovered in a year (12) - Lesotho is home to several diamond mines either recently entering into or nearing full production, with more in development. As a result, Lesotho will continue to be a major diamond-producing country in the coming years. The country recently more than tripled its diamond production as a result of the Liqhobong mine (Firestone Diamonds) reaching full steam and the Mothae mine (Lucapa Diamonds) starting to yield results. The latter’s first shipment of about 2,500 carats is currently in Antwerp for valuation and includes two yellow rough diamonds weighing 90 and 25 carats. The Kao mine (Namakwa Diamonds), which boasts the largest kimberlite pipe in Lesotho, also tenders its goods on the Antwerp market. The Lemphane mine (Letlaka Mining) and Kolo mine (Batla Minerals) are currently in development.

The average price for diamonds from Lesotho in 2016 was an astounding $1,066 per carat, making them collectively the most valuable diamond production in the world on a per-carat basis. In 2017, however, that average declined to $304 per carat as a result of Firestone Diamonds' production of large quantities of average-quality diamonds from the large Liqhobong mine, pushing the country’s output from 342,014 carats in 2016 to 1,126,409 carats in 2017. The AWDC notes that given all of the above, Lesotho will continue to be a major strategic partner in the years to come.