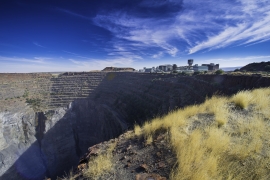 Despite its annual revenue rising 25% and its profit from mining activities up 33% to US$205.1 million, the miner recorded significant losses ($203.1 million) and Petra Diamonds' CEO Johan Dippenaar will step down after 12 years at the helm following a slump in the company’s share price this year. The miner was forced to raise $170m in capital from shareholders last May to shore up its heavy debt, which has run up over the $600 million mark and accelerated the company’s share price fall this calendar year, which is down by 43%. While Petra reported that preliminary earnings before interest tax and other items, or ebitda, rose 35% to $195m in the year ended 30 June 2018, the company still recorded a net loss after tax of $203.1 million. The results included a $66m impairment charge for its Koffiefontein operations. Achieving total production of 718,635 carats for July and August, Petra said it was on track to achieve its guidance of 3.8m to 4m carats for the 2019 fiscal year.

Petra recorded sales of approximately $78 million from the September tender, with prices down about 5% on a like-for-like basis, compared with H2 FY 2018, affected by seasonal weakness as in previous years. The average price of goods from the Cullinin mine were at the lower end of historical price ranges. From an operational standpoint, Petra's 2018 production excluding Kimberley Ekapa Mining JV (KEM JV) which the company sold last July, increased by 19% to 3.8 Mcts (FY 2017: 3.2 Mcts); including KEM JV, production was up 15% to 4.6 Mcts (FY 2017: 4.0 Mcts). Johan Dippenaar, CEO, said: "FY 2018 yielded good operational results, the highest on record to date, in spite of the challenges experienced in FY 2017 and H1 FY 2018, and this was underpinned by strong safety performance across the Group. Learning from past challenges, the Group's focus is to regain investor confidence by the continued optimisation of operations."

CEO Dippenaar will remain with the company until a successor is found, the miner said, adding that they would make new non-executive appointments to the board in October. Johan Dippennaar has been the chief executive of Petra, which produces diamonds in South Africa and Tanzania, since it merged with Crown Diamonds in 2005. Adonis Pouroulis, company Chairman, said: "Johan has led Petra through a long period of significant growth, taking the company's annual production from approximately 175,000 carats in FY 2006 to 4.6 million carats in FY 2018, and establishing the company as a leading independent diamond producer. As Petra now approaches the final stage of its expansion plans, it is positioned to reap the benefits and, in line with the Nomination Committee's Succession Plan, a successor for the CEO position will be appointed in due course. Johan will continue in the role of CEO until this time and will work closely with the Board to ensure an efficient handover. I would like to take this opportunity to express the Board's sincere gratitude for all that he has done for Petra."