ALROSA Plants 80,000 Trees As Part of Rehabilitation of Mine Site 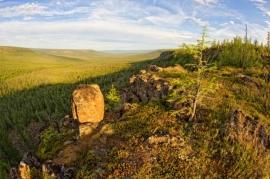 PJSC Severalmaz, a subsidiary of ALROSA Group, has planted over 80,000 pine tree saplings at the Soyansky State Bio-Reserve as part of their effort to revegetate 40.6 hectares of forest in the Arkhangelsk Oblast region in northwestern Russia. This revegetation effort was an obligatory follow-up after processing the sand and gravel extracted from the site that had been leased to Severalmaz by the Ministry of Natural Resources and Timber Complex of the Arkhangelsk Oblast. The technical preparations for the revegetation were completed in 2017 and included flattening the slopes of the sand pit, cleaning up and leveling the territory, and spreading fertile turf over the designated area. The summer of 2018, in turn, saw the biological stage of the revegetation, namely the planting of ball-rooted pine saplings, 2000 per each hectare. The overall number of saplings planted by Severalmaz exceeded 80 thousand.

"We worked with the location in mind. The site is more than 100 km away from Arkhangelsk. Due to the severe climate conditions, we had both to ensure that the saplings would adapt well and to complete the revegetation within strict time constraints. We have done great work and managed to complete the project on time," says Aleksey Ivanov, the chief environmental expert at Severalmaz. This was Severalmaz's first time revegetating such a vast area. According to the official ratings by y the Russian branch of the World Wildlife Fund and the joint initiative of the United Nations Development Program, the Global Environment Facility, and the Russian Ministry of Natural Resources and Environment, ALROSA Group is one of the top three most environmentally friendly mining companies in Russia. Its environmental strategy is aimed at sustaining and preserving the natural ecosystems, as well as operating in an environmentally friendly way. The company's environmental projects receive over 5 billion rubles' worth of funding (approximately $72 million) each year.