West Australian Gov't. Looking for Miner To Restart Ellendale Mine 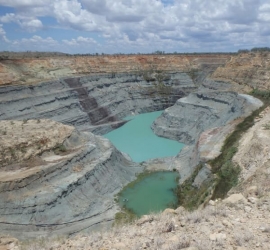 The Western Australian Government is seeking expressions of interest to reopen and operate the Ellendale diamond mine in the Kimberley region of Western Australia, reports Australian Mining. Ellendale previously provided about half of the world’s highly-valued fancy yellow diamonds, of which US jeweller Tiffany & Co was a major client. Mining operatoins ceased in July 2015 when Kimberley Diamond Company (KDC), which had operated the mine from 2002 to 2015, entered into administration. KDC went into liquidation the following month amid controversy, owing millions to creditors, unpaid workers and rehabilitation costs for the mine, which the state eventually inherited. The mine produced almost 1.3 million carats of gem and industrial-quality diamonds over its lifetime, including the highly-valued fancy yellow diamonds.

After the mine was closed in 2015, the Minister for Mines and Petroleum Bill Johnston created an exemption area under Section 19 of the Mining Act to allow for a new mining company or consortium to apply for a new mining lease. The Minister will select the successful applicant after considering the expressions of interest. “New processing and innovative marketing could lead to restarting of production at Ellendale,” Minister Johnston said. “So we are looking for a company that will bring fresh eyes and a new approach which will result in a successful restart of mining operations.” He said that there were still materials known to contain diamonds when the former operation closed. “This is a rare opportunity for a suitably qualified company with the ability to mine diamond ore, process it and then market the diamonds. However, the prime goal is for the remaining resources at the site to be developed for the economic, social and environmental benefit of the site, the regional community, and the State,” he added.

The Minister also said the invited company would be expected to have experience in diamond mining and marketing, a commitment to compliance with the approvals and regulatory requirements of mining in Western Australia, to be competent at all the consultation processes needed for community acceptance of its operations, and be able to fund a new operation. The Minister said that a new operator would not automatically be expected to address all the legacy impacts remaining after the abrupt closure in 2015, but he expected the new company to approach the area with a sense of responsibility to assist in cleaning up heritage issues left by the former miner. “We will not be telling a new leaseholder how to do its job of mining, but we want to ensure that the successful company does its work safely for its workers, the community and the environment,” he said.